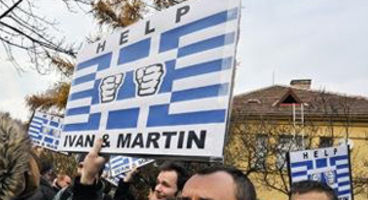 Ivan Buchta and Martin Pezlar have been released on €5,000 bail after being detained for four months by Greek authorities, without charge. The Bohemia Interactive devs can return home.

The developers were accused of taking pictures of military installations on a Greek island to undermine national security. Neither are required to remain within Greece, so hopefully it will all go away.

This has likely come about from Czech Republic's leader Petr Nečas directly contacting his Greek counterpart. This bizarre situation caught attention of press and eventually leaders.

The island in question features in the upcoming ARMA 3, which is a battle ground between NATO and Iranian forces. With any luck Ivan Buchta and Martin Pezlar will now be free of this nightmare, with Greece perhaps looking to let this ugly business just fizzle out and be swept up the rug.

"As a result of repeated dealings, today the Greek Prime Minister Antonis Samaras informed Czech Prime Minister Petr Nečas over the telephone that the two Czechs arrested by Greek police because of supposed photography of military objects on the island of Lemnos have been released. Both can now return back to the Czech Republic. PM Petr Nečas expressed appreciation for the efforts of PM Antonis Samaras and thanked him,” said a Petr Nečas spokesperson.

Congratulations to Ivan Buchta, Martin Pezlar, Bohemia and everyone who's fought for their freedom.