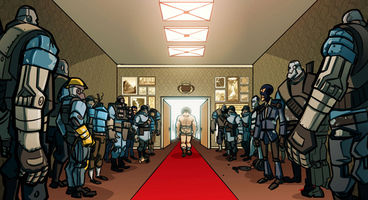 Valve has added Chemistry Sets to TF2, as well as Birthday Hats and Noise Makers. Play on a Mann vs. Machine server with an owner of the Hardy Laurel and enjoy Romevision.

"This is the first time we’re releasing a comic that isn’t tied to an impending update. Why are we doing this? Because sometimes reading is its own reward. Not most of the time, obviously," blogged Valve.

"But we think you’ll agree this comic series deserves to join the menu at the Olive Garden, Fitzscott Gerald’s The Great Greatsby, and the beginning part of a jet-ski manual that tells you how to start the jet-ski as one of the three or four things humanity has produced that’s actually worth reading."