06 January 2014 | By Nick Horth
Brad McQuaid, who worked as a designer on EverQuest and executive producer on the not-very-fondly remembered Vanguard: Saga of Heroes, revealed the news on his twitter account, and shared the first pieces of concept art.

McQuaid describes the Pantheon: Rise of the Fallen as "challenging planar high fantasy", although it's hard to work out much more about the game's world from the limited scraps we've seen so far. Here's a man in a chair. 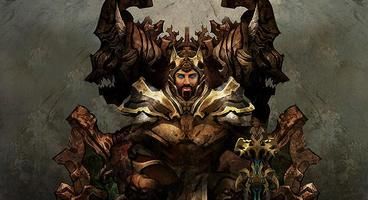 McQuaid also confirmed that the game is not owned by Sony Online Entertainment, who published Vanguard, and that there's a "minimum of 3 years to release", although a beta is incoming.

There's a Kickstarter campaign planned (of course), so we should find out more info in the coming months. In the meantime you can keep an eye on the official twitter page, which should become active soon.