A Taste of Narcosis

Narcosis is psychological horror in the deep ocean

19 November 2014 | By Nick Horth
You can keep your haunted mansions and spooky forests, the most terrifying thing I can imagine is being stranded alone in the deep ocean, wondering which unpleasant, razor-toothed swimmy thing is going to pounce on me and rip me into fish niblets.

That's (sort of) the concept behind Narcosis, a survival game in which an industrial diver finds himself trapped at the bottom of the sea, desperately searching for oxygen and a way back to the surface before he loses his sanity completely.

It's actually not so much the local wildlife that makes up the horror here, but the alien nature of your surroundings and narcosis itself - the hallucinations disorientation, and confusion caused by breathing nitrogen and other gases under high pressure. Are you losing your mind or are you really in danger? That could make for some truly excellent horror. you can get a sense of that in the recently released in-game trailer, above.

And if you're brave enough, you can brave the ocean depths with an Oculus Rift. Narcosis is fully Rift-compatible, which should make the unsettling environments and bizarre creatures you'll run into about 90% more horrifying. Lovely.

Developers Honor Code have been working on Narcosis since 2013, when it began life as a school project, but they've only recently began to focus on it with the intention of a full retail release. They're hoping to have it ready by the third quarter of 2015, and you can find out a bit more on the game's website.

Related Games:
A Taste of Narcosis

A Taste of Narcosis Essentials 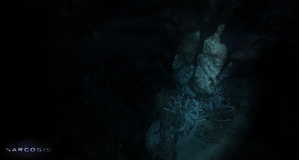