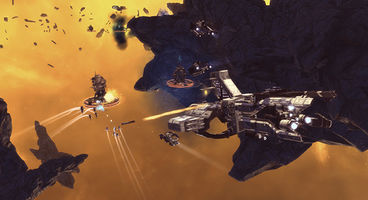 A real-time strategy game in space is now available as Paradox Interactive and developer Creative Forge unleashed Ancient Space upon our keyboards and mice.

It's a story-driven RTS with "deep strategic gameplay" and some notable sci-fi actors from film and TV, like him from Star Trek and her also from Star Trek. Mac release is coming soon.

We take command of a fleet in Ancient Space and explore, with very limited resources, the edge of the universe. We're to chart what lies beyond in 'The Black Zone'.

"Ancient Space is a story driven single player real time strategy game where you take command of a fleet embarking on a scientific mission to chart undiscovered reaches of space called ’˜The Black Zone’. Overcome overwhelming odds and fight for your life and the survival of your ship and its crew," reads the official website.

"Ancient Space features real time strategic starship battles that encourages tactical maneuvering. In time honored RTS tradition, you build and upgrade your fleet as you complete mission objectives and gather resources which allow you to progress further into the game. Chart your approach – from defense to offense and everything in between such as escort and stealth missions." Ancient Space is available now on PC through Steam and others for $19.99 / Â£14.99.