The human race is under attack from an alien fleet abducting en masse across space, so it falls to us in XO to marshal a fleet, grab as many survivors as we can, and take the fight to the enemy mothership.

At least it will be our solemn duty if the XO Kickstarter campaign succeeds with its $40k goal, and it's very nearly there with 22 days left. A new pre-Alpha game walkthrough video has been released.

Jumpdrive Studios want XO to have a Battlestar Galactica vibe to it, as well as games like FTL. We start small and must always be mindful of how long we stay at any given location because the enemy will come in ever-increasing waves of difficulty until we jump out.

"A relentless, overwhelming enemy has emerged to abduct your people. There's no time to colonize planets, negotiate with alien races, or build an empire. You're outnumbered, out-gunned, and low on resources. Knowing when it's time to fight or flee will be the key to saving the human race."

"Commanding your fleet and managing resources is only part of your job. You'll also need to lead a variety of personalities as you gather and protect a flock of civilian ships. Who you choose to elect onto your council will affect the entire fleet and alter the options available to you. Your leadership will either inspire loyalty and sacrifice, or drive your people to treachery and sabotage..." 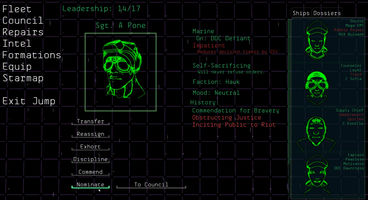 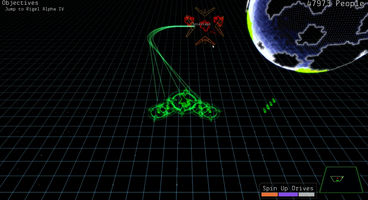 It's a single player game that passed through the Square Enix Collective, which is sort of like Steam's Greenlight system except it's designed to reflect whether a studio should take something to Kickstarter and the like.

Combat plays out on a 2D plane with very retro sci-fi visuals from the arcade days. Ships move with plotted waypoints and can't immediately turn around once committed as it uses a degree of Newtonian physics to govern movement.

We'll have to keep an eye out for mutinies and political schemes too among the fleet. A special council will have influential members appointed which grant us benefits providing we don't ignore their advice one too many times.

Check out the XO Kickstarter campaign to learn more and watch the pre-Alpha walkthrough.