History: Great Battles Medieval delivers an accessible, if lightweight, strategy RPG experience based on the historical events of the Hundred Years War. It's a subject matter that's hardly likely to get the pulse racing without a little bit of embellishment or interesting presentation. Unfortunately, History Great Battles Medieval suffers from lacklustre presentation and limited controls on the Xbox 360 and PS3.

The backdrop of the Hundred Years War means the action takes place exclusively on the French continent and choosing a battle is a simple matter of selecting an icon on the quest map. There's no deep resource management or overall strategy to get down and dirty with, just a matter of upgrading or recruiting your army and clicking on the next battle.

It's a little underwhelming if you're expecting a more epic experience and the visuals don't do anything to liven up proceedings by being fairly basic and lacking in detail. Once you've got over the lacklustre presentation, combat itself is handled in a very stop/start way. Playing out in real-time, the action pauses whenever you want to issue an order, making it more turn-based in operation. It's clear that this was implemented either to accommodate a 360 or PS3 controller or to be more accessible. It works well enough but has the effect of making battles either too simplistic when you're dealing with a few units, or too awkward to manage when you're ordering around a full compliment.

This is a theme that runs through History: Great Battles Medieval. On the one hand it's an accessible strategy RPG that's ideal for first-time players, but on the other it doesn't provide the sufficient tools to help you deal with the more complicated situations later in the game. The two campaigns that form the bulk of the game are each designed slightly differently. The English campaign is intended for new players and the French campaign goes straight into some more complex battles from the off. As a historical title there are a variety of heroic characters that you'll be fighting with or against, including The Black Prince and Joan of Arc. These usually have their own specialised units and are sometimes, frustratingly, controlled by the AI.

Each of these campaign missions are preceded by a short History Channel clip, setting the scene and trying to put into context the importance of each battle you're about to face. This could've been an interesting and educational prelude to spilling blood on the battlefield. Unfortunately, these brief films are a grainy, standard definition mess and any educational material is ruined by some awful and contrived narration. Brian Blessed did a better job bellowing in your ear in the Alexander The Great expansion to Rome: Total War. As this is a History Channel game I really expected a higher level of material and a beardy, shouty man would've made all the difference.

Whatever campaign you choose to start with you'll soon be upgrading or building up your army. This is where the RPG aspect of the game comes to the fore and it's pretty easy to grasp. Recruiting is simply a matter of spending Florins to acquire basic infantry, archer or mounted units and then spending more gold or skill points to upgrade weapons, shields and stat bonuses.

For such a simple upgrade system there's a lot of scope for variety. Once you get further into the campaign new items unlock and before long an impressive array of mounted knights, cannon units and infantry squads will be at your disposal, enabling you to create an individual fighting force. PC strategy veterans will scoff at how basic this will all seem compared to the Victoria or Total War series, but History: Great Battles Medieval puts accessibility at the forefront of its experience. From its basic tutorial and command system (which consists of a go there or attack here system) to the user interface for upgrading your troops, it's clear that newcomers to strategy games are the target audience here.

This makes some aspects of the game a little baffling and unbalanced. The campaign, for instance, constantly requires you to level up your troops by replaying the secondary missions to gain experience and acquire more gold. These side missions quickly become dull affairs and raiding or defending the French countryside for hours on end didn't strike me as particularly user-friendly, or fun. As an RPG nut I'll gladly grind Lord Percy of Northumberland up to his maximum level and deck him out in the finest sword and shield money can buy, but I doubt first time players will be quite so eager to do the same.

Perhaps a more basic problem is the restriction of using the controller in certain situations. When faced with a defensive situation it's easy to manage stationary troops but the moment you're required to push forward and take the fight to the enemy, the controller gets in the way. There's no option to group troops together and moving an entire 16-unit army across the map requires multiple button presses and whacking that analogue stick back and forth where other games, even on the console, have a way to make managing large armies much more intuitive and user-friendly.

For both the experienced strategy player and the newcomer, History: Great Battles Medieval lacks the direction to satisfy either demographic. Although there’s a large amount of content in the form of two long campaigns, a skirmish mode, tug-o-war and multiplayer, you’ll rarely come across a battle that’s particularly epic or impressive. There’s certainly a lot that makes it accessible for new players at first but the restrictive console controls and the lack of visual finesse make this very hard to recommend.

Watching in glee as my longbowmen decimated the advancing French knights without losing a man. 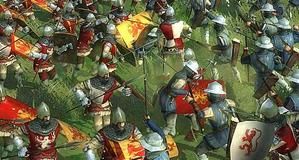