Chris Capel tried out three proper games and the Oculus VR headset for the first time. Is he sold on gaming's bright new future?

“The future. I’ve got to check this out, doc.” The stirring words of Marty McFly are what I live my life by, so it’s astonishing to me that only just last month at EGX Rezzed I got my first time with a Virtual Reality headset. More specifically, the current DK2 developer’s build of the Oculus Rift and three proper games to play it with. No, not tech demos, not proof of concepts, proper games. The type of games that you could happily play without VR but are immeasurably enhanced by the experience. Like that caffeine fix at midday - sure you’ll live without it, but then what’s the point in living?

Those three games were dungeon crawler Crystal Rift, James Bond jetpack adventure Omega Agent and the Descent inspired Sublevel Zero. First though, let’s have my general thoughts on the feel of the overpriced glorified View-Master (kidding… OR AM I?). 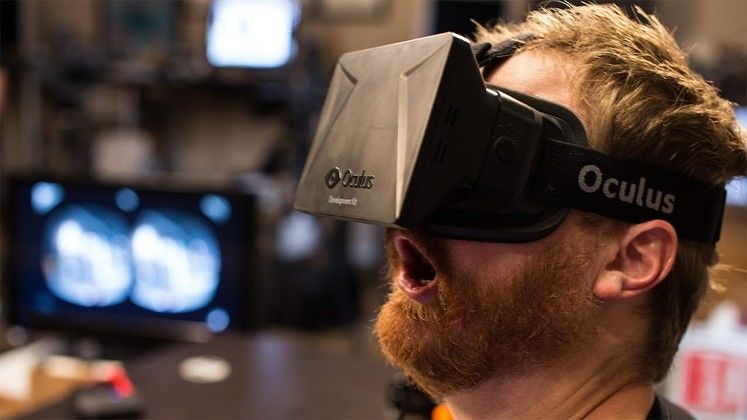 THE FEEL OF THE THING

As mentioned this is the Oculus Rift DK2 kit so not the final version. It was indeed very comfortable though, feeling natural on my head and face and definitely something I could envision wearing for a while. However there is something that no report on the Oculus that I’ve read have mentioned, and that’s how glasses cope with it. I could just about fit my medium-sized glasses in to the Oculus, but not to the extent that it was comfortable or I wasn’t worried they were going to get damaged or bent out of shape. I put my contact lenses on for the last two demos, but for Omega Agent I was forced to see this brave new world in blur-vision. Oh well. If you wear glasses, definitely have a good think or a supply of contact lenses before considering playing an Oculus.

Otherwise though I do acknowledge the slight ridiculousness of having an Oculus device over my eyes, headphones over my ears, and my hands wrapped around an Xbox pad. I got used to it fast, and fortunately I know the Xbox pad well or more complicated games (see one below) might be a pain. I think I looked stupider than I felt. Still, it was a cross I was happy to bear for the sake of a new, fun experience. And it was fun, mostly thanks to three interesting games.

Not only was Omega Agent the first game I played on Oculus, it was also the game that sold me on VR. After strapping various things to my face I was put into a game where a giant metal frame was strapped to my body too. 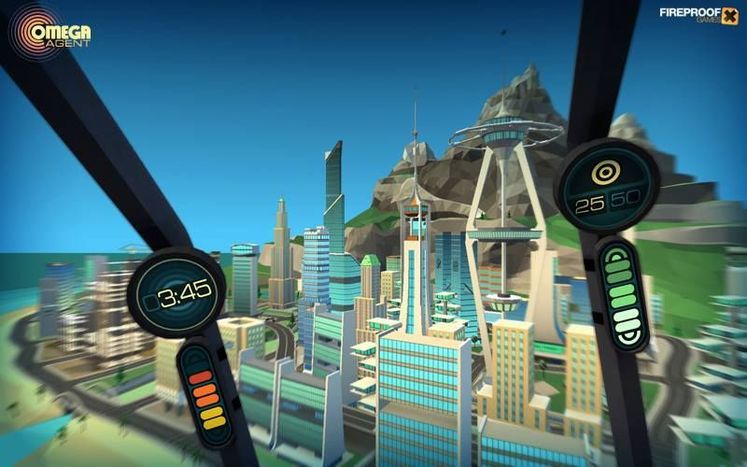 That metal frame was a jetpack. Has anyone seen Thunderball? In the pre-credits sequence in Sean Connery’s fourth James Bond movie, after fighting with an undead cross-dresser he escapes using a large jetpack he just happens to find parked on a rooftop, flies at least tens of metres, then stuffs the jetpack into the boot of his car where it’s not seen again until he’s Pierce Brosnan. Omega Agent is best described as the game of this scene, except with a lot more jetpack and a lot less fake zombies in drag.

The demo was simple, and partially blurred because as mentioned I didn’t have my contacts in yet. Nevertheless, I said ‘wow’ out loud more times than any other full game I’ve ever played. Fireproof’s co-founder Barry Meade told me, “we wanted to come up with a game that allowed players to zoom around an interesting VR world with some freedom, because most VR games out there are more like ‘VR experiences’ and they’re not like videogames, whereas we wanted to make a traditional videogame out of VR”.

Imagine a city on an island with a giant mountain with a stylish retro cartoon graphics style akin to The Incredibles. Now imagine you’re there, looking around, which is cool enough, but you’ve got a jetpack. With a simple press of a button, I was rocketing up over that city… and could keep going, into the clouds, around the island, out to sea, back to the city, through buildings and billboards. It was incredibly fun.

The controls were wonderfully easy to get used to as well, which is good as I couldn’t see the Xbox pad in front of me of course. There’s a thruster to send you upwards which works just as you’d expect, another button gives you a burst of forward speed, and two other buttons fire machineguns and shotgun blasts in the direction you’re facing. There were only a few drone enemies about but there’s potential here for a full, fun, proper game, and just flying around messing about was great. Using a shotgun to set a giant stone boulder rolling down the mountain and out to sea gave me a burst of giddy delight that such a simple act really shouldn’t have done. I didn’t say ‘wow’ when soaring over Kyrat in a Gyrocopter but I did firing a shotgun at a rock. Note to Ubisoft: an Oculus Rift version of Far Cry 4 where you’re confined to an armed Gyrocopter would be awesome.

On the opposite end of the scale from huge open world ultra-colourful flying adventure but no less enticing comes Crystal Rift, a first-person dungeon crawler, and so the pitch here is “Virtual Reality Legend of Grimrock”. Ah, now I’ve got your attention. 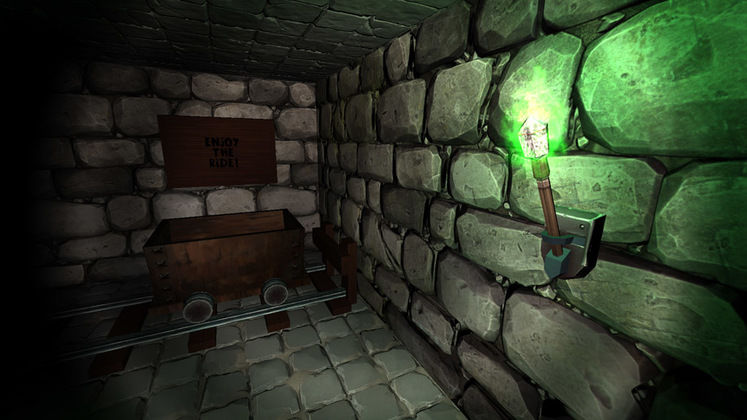 Strapping the Oculus Rift back on, with contact lenses freshly installed onto my eyeballs, I was transported to a very dark square room with stone walls. As I moved my head a simple torch followed where I was looking, barely illuminating even the small room I was in. The graphics were simple, but then this is an early demo and frankly it didn’t really matter. I was tasked with solving simple puzzles in the environment, exploring, and trying not to die… or fall out of my chair when a screaming red demon’s head flies straight at me from out of the darkness. I beat the demo but failed that last task.

One of the things that caught my attention most when talking with Nick Pittom from Psytec is the revelation that one of the options for Crystal Rift will be a “creepiness slider”. “We found some people like it really scary and others don’t like it scary at all, so we’ve added ‘scare levels’. You can have things really scary, or you can tone it down a bit and even turn the scares off. The scares add to the atmosphere but the actual game is all about the challenges and the puzzles, so it’s good to have the option.” I like this idea, especially as my first thought when hearing about horror in VR is “what a great idea!” followed by a second thought of “… but there’s no way in hell I’ll play one.”

The best comparison isn’t actually Legend of Grimrock or other classic dungeon crawlers like Eye of the Beholder, since there won’t be any combat and that’s half of what those games are about. I’d say it’s actually the old UK kid’s TV show Knightmare, where a masked child who can only hear things directly around him is guided through a dangerous fantasy world by a team of other kids and tasked with solving puzzles. You’re playing the masked kid, and while you can see a little bit better the grid-based movement controls meant I might as well have been saying “take two steps left then step forward” to another person. It’s a bit of a disconnect and honestly it was the only VR game that made me slightly motion sick, but it’s not a bad thing as it still presents a rather unique experience, and I liked that there were multiple pathways through the dungeon and even secrets to find. If Psytec can make the graphics a bit better and cut down the motion sickness it’ll be one intriguing game. There will be a level editor which you can apparently use in VR too, which sounds amazing on its own.

If the three games I played had one thing in common, it’s that they’re all ideas for VR games that as soon as I heard about I said “that’s a brilliant idea for a VR game”. Naturally with the inability to walk about using Oculus, games like Elite Dangerous where you’re strapped into a cockpit sound like the best use of the device. Sigtrap’s Sublevel Zero falls into this category, but with a very specific twist: it’s a VR version of Descent.

It’s also by far the hardest game I’ve played today. If you haven’t played Descent (watch the video) you’re in a spaceship but you’re flying through subterranean caverns instead of space, and Sublevel Zero is much the same. It’s a roguelike, it’s intentionally disorientating, it’s tough, and it’s made tougher by the fact that I couldn’t see my hands. I know the Xbox pad well and I still struggled since I don’t know the Sublevel Zero controls well. Is that a rocket? How do I pick up things? What’s that big thing shooting at me? Oh, I’m dead. 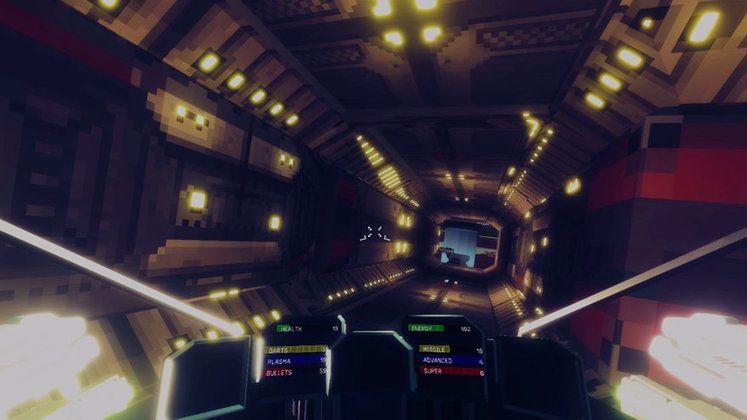 The second time around (sorry to the people in the queue behind me, to be fair it took me longer to setup the game than it did to play it the first time) I survived right until the end of the level, hooray. The trouble is I didn’t realise you could run out of ammo and I ran out halfway through. I accelerated down cramped enemy-filled tunnels with some wonderful steering if I say so myself, then got to a boss character and had no way of shooting it. I died, again.

With careful play though I could have a lot of fun with this game, and was made even more amusing with VR. Furthermore, if you want to try it without VR, good news, it’s out on Steam Early Access this summer.

SO, ARE YOU SOLD?

Absolutely. I was sold on VR the moment I thrusted to the top of the tallest building in Omega Agent, and I couldn’t even properly see what was going on. Being able to turn my head and actually peer around the game world, then point a machinegun and shoot a target the way I’m really facing was the greatest thrill I’d ever had in a game. Then to properly experience a perilous dungeon or sit in a cockpit and rocket through tunnels? Bliss, and these three games alone would justify the purchase for me of an Oculus or similar VR device. 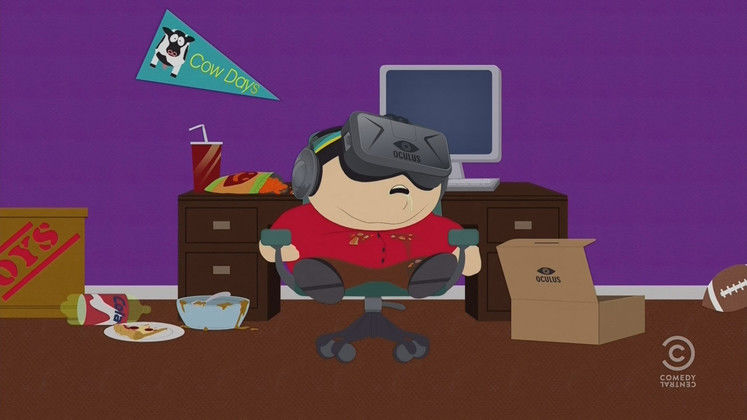 Of course, there are snags. Walking in Crystal Rift was the only time I felt motion sick, but even ignoring that game’s deliberately tile-based movement simply getting around in VR will be difficult unless you have the Xbox pad memorised. Furthermore while the headtracking is excellent there’s still the feeling that I was peering in to a world rather than actually being there since the Oculus Rift doesn’t completely surround my vision. Both of these problems may be solved by Valve and HTC’s Vive effort, or just the final version of Oculus, but then we get into the problem of price. How much will these things cost? Frankly if Valve announce Half-Life 3 as a Vive exclusive my preorder will be in before they finish their presentation.

No matter what the future may hold though, VR is coming, and I am now a true believer. However I won’t be using Facebook on the damn thing, that’s for sure.