EA and DICE bring us conflict set 136 years into the future and it looks good, real good from a gaming point of view.

There was once a time where EA threw Battlefield into the future with not much success. Long before Call of Duty decided to throw us into space or give us jetpacks and wall riding, Battlefield 2142 was already way out into the open. While it may have been too ambitious a project for technology at the time, or just something people didn't really want back then, the game wasn't a much of a success.

Then, to rub it in further, the game went dark. Gamespy and its complete online infrastructure was shuttered dragging a long list of online games down into the abyss with it. Completely unplayable online, Battlefield 2142 was to be forgotten - until modders brought the game back online through some form of technical witchcraft.

Battlefield 2142 had a Titan mode which featured a hovering air-carrier that had to be brought down, or defended. Now DICE are bringing it back as the re-imagined Carrier Assault in the upcoming Naval Assault DLC.

The studio is yet to go into detail about how you'll sink the carrier, but Titan mode involved holding key missile launchers that bombarded the air-carrier. Naval Strike is due in late March. 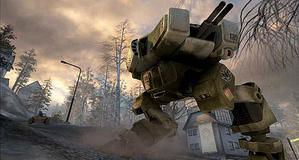