Free Lives' shoot 'em up action parody Broforce will leave Steam Early Access on October 15, after over a years of improvements, patches and free Bros based on various cult action stars.

Never a game to opt for the understated route, the additional campaign missions that will come with the full release see you head into Hell itself to punch the Devil in the nuts.

Broforce gets (more) patriotic with the Freedom Update, which adds two new Bros

It was Independence Day over the weekend, of course, a day for celebrating the victory of Will Smith and Jeff Goldblum over those despicable alien idiots. To mark the occasion, Broforce developer Free Lives is adding two new action hero Bros to the action-packed side-scrolling shooter in a new 'Freedom Update'.

First up you've got The Brocketeer, a jetpack-wearing hero based on the main character from the much underrated 1991 sci-fi flop The Rocketeer. Seriously, I really like that film, go watch it.

The latest BroForce update adds a new 'User-Generated Island' off the coast of the game's world map, where players can play the best user-created missions from Steam Workshop.

BroForce's level editor was added last month, and the simple tool-set has allowed modders to create a bunch of new areas for players to blow up in the game's inimitable style.

Let's all take a minute to appreciate the hard work of developer Freelives. Not content with creating a fantastically silly and entertaining scrolling shooter with Broforce, they've been pumping out free content for the game ever since its launch.

And they're still not done. Though if you feel like giving the poor chaps a break, the latest 'tactical update' adds Steam Workshop support, alongside new Bros and new maps. 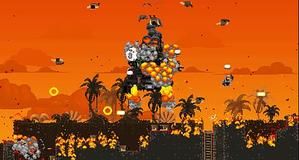