It's surely easy to die in this game, strategy is most important if you want to finish it. The only thing I did'nt like was that tanks have shoot skills equal to troopers, but for the rest I enjoyed much playing.

When playing Brothers in Arms, one of the first things you'll notice is how easily you die. If you want to finsh this game, the one thing you cannot do is go charging off like you would in Call of Duty. It's not going to happen. You'll be cut down in seconds, and will be starting over again. In that respect, it's very realistic. So to is the fact that you can't get healed while on a mission. If you get wounded, you have to make sure you stay away from being shot for the rest of the mission. You'll get healed between missions, but that's it. This does make things difficult, but its also very realistic.

So to is the way that your enemies will respond. If you play the same mission twice, you won't always end up with the Germans doing the same thing. Sometimes they'll come one way, and sometimes they'll come another. It's not the most intelligent AI ever, but it's certainly better than most, and it improves in the sequels to Road to Hill 30.

The big part of the way this game works is in the squads you control. You start with one, and eventually work your way to two - a fire team and an assault team. You use these to first suppress German units, and then to flank and take them out. You do inevitably lose casualties, but with reasonable planning you can make your way through most missions pretty well. The rule is always suppress and flank, so this does get a little tedious, but it's the way soldiers actually fought in WWII, and do today.

So should you play this game? It's not for everyone. You can't just charge through the game popping off shots at the Germans and expecting to win. You have to sit back, take your time, and think your way through things - at least some of the time anyway. You also won't like this if you don't like historical shooters. I am inclined to both, so I very much enjoyed this, even though I did find some missions pretty frustrating at times. 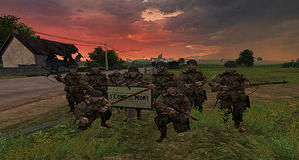