Brutal Legend: Is it metal enough for you? (PS3)

Success of Psychonauts 2 could mean development of Brütal Legend 2

Brütal Legend is a beloved game and possibly one of the most well-received games Double Fine and Tim Schafer has ever published, but the matter of a sequel has always been sketchy, if not non-existent. However, in the wake of the Psychonauts 2 Kickstarter already underway, the subject has come up again and Brütal Legend 2 might very well be possible.

Double Fine's Tim Schafer says he "would love to go back" to the Brutal Legend universe, and he thinks Jack Black "might be up for it, too," the well-known actor and musician behind the lead role.

It cost around $25 million, and ponying up that kind of cash for an entire sequel "might be tricky," admits Schafer, but he'd love to return "even just do a DLC pack".

Brutal Legend's Double Fine is all thumbs up for SteamOS, especially as their games are already working on Linux. Controllers will no longer be "an afterthought" by PC developers.

Paradox Interactive also jumps in proclaiming the new Europa Universalis IV and Crusader Kings II is ready to go for SteamOS including "all our future games". 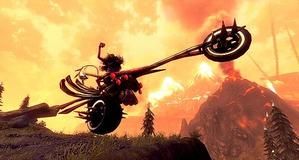