Colin McRae's DiRT is a fabulous game that just didn't make the cut to stardom because of its lack of capable multiplayer. 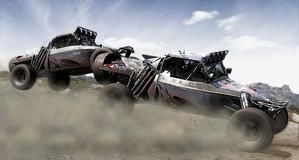