Runic Games are mostly known for developing the Action RPG series Torchlight, but since 2012 it's been taking a different direction with Hob, an action adventure game that's in development for the PC and PlayStation 4.

The team announced today that it would be released for the platforms mentioned above on the 26 September, 2017.

Runic Games, best known for the excellent Torchlight games, has a new project in the works. Hob is an adventure game without text or dialogue, set in a strange, unexplored world built upon mysterious machinery.

“Hob is presented without text or dialogue,” writes Runic. “Narrative is revealed as players explore and interact with their mysterious planet, and the strange life forms that inhabit it. Hob features smooth controller gameplay, multi-layered puzzles, and striking visuals.” 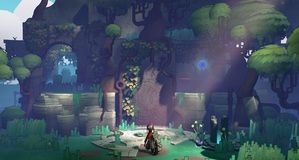