Klei has upped and forged new IDs for their turn-based spy-athon. It's ditched its old Incognita passport for a new identify as Invisible, Inc. The gameplay remains the same, as the new trailer shows.

Luckily its visual flair hasn't undergone a change, which means it looks as alluring as ever to be a turn-based spy. Invisible, Inc is available to pre-order with an alpha build available to play.

Indie developer Klei has just opened up pre-orders for their turn-based tactical espionage game Incognita. It's the same studio that brought us Don't Starve and Mark of the Ninja. Currently they're in alpha.

By pre-order now you can in fact infiltrate with early alpha access. The core mechanic of turn-based sneakery is in, but major content is "still being implemented."

Earlier in July, Mark of the Ninja developer Klei Entertainment announced Incognita, an espionage stealth-action game. On Friday, the 26th July, Klei did a live stream and Q&A about their new game, which showed off the gameplay mechanics boasted by it.

Klei Entertainment has announced its next project, which will be a "turn-based espionage game" Incognita. The developer is best known for producing Mark of the Ninja and the Shank titles. 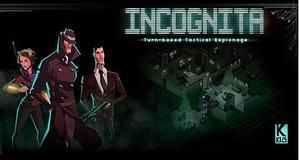