Xbox Live Marketplace's schedule till mid-September is out, with Crimson Alliance, Leedmees for Kinect, BloodRayne Betrayal and Skydrift now on XBLA.

Rockstar Games has a Publisher Sale running next week with 50 percent off, and the Deal of the Week focuses on DICE's Battlefield: Bad Company 2.

The second developer diary for Treasure's air racer Skydrift has been released. In this diary, the eight models of aircraft are examined, and how they interact with each other and the environment.

Publisher Digital Reality and developer Grasshopper have announced that its upcoming aerial racing game, SkyDrift, will be released on PC, Xbox Live Arcade and PlayStation Network on September 7.

The second of two games that are the product of the collaboration between publisher Digital Reality and developer Grasshopper, Skydrift, gets its first developer diary. 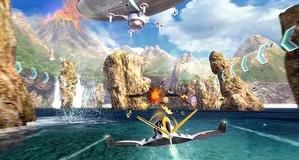