Spacebase DF-9, the space station management sim, moved out of Steam Early Access and into full release today, minus several features that were initially promised.

Perhaps in response to fan criticisms over the cut content, developer Double Fine is giving a free copy of action adventure Hack 'n' Slash out to current owners of the game.

People are majorly not happy with Double Fine's handling of Spacebase DF-9, so company boss Tim Schafer has taken to the game's Steam Community page to answer questions.

It was announced last week that the space-based sim would be moving out of Early Access and into full 1.0 release in October, minus several features that fans were promised during production.

Space is cold, hard and brutal - it wants to kill you. Spacebase DF-9 offers us the chance to try it out anyway, and will be leaving Early Access next month announces Double Fine.

Unfortunately it marks the end of any new content for the 'town builder' sim, with the team only focusing on bugs from then on. Instead they're releasing the lua code to the community.

Spacebase DF-9 from Double Fine now at Alpha 6, has power and anger issues

The Early Access title Spacebase DF-9 from developer Double Fine is now at Alpha 6, announces the small team behind it. In fact they're actually at Alpha 6b having released some hotfixes.

Those hotfixes targeted the new hot-under-the-collar citizens as anger is now a threat, with brawls liable to breakout. Thank goodness for brigs.

The latest Alpha update for Spacebase DF-9 has been released for Windows, with Mac and Linux delayed due to some "core tech changes" by the Double Fine team. There are some interesting new additions.

We can now build turrets both inside and out of our floating spacebase, which'll help fend off Raiders and their new Breach Ships. Our citizens are now also prone to sickness and injury. 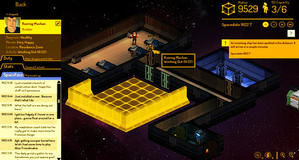