Online shooter-thon Stargate Resistance will be switching off its servers January 15th as the game officially retires. Purchases have already been disabled.

Developer Cheyenne Mountain won back the rights to Resistance but MGM rescinded the Stargate license shortly before, ending their hopes entirely.

MGM Studios have grown tired of Cheyenne Mountain Entertainment and their 'progress' with MMO Stargate Worlds, so they've taken back the license.

They issued a notice of termination November 3rd, leaving the MMO project seemingly stranded off-world in 'Stargate speak'. Well that's over then. 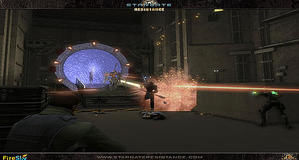