Curve Studios's action-platforming stealth puzzler Stealth Bastard will be receiving its next DLC The Lost Clones early next month. It is also the final additional piece of content that expands the campaign 20%.

Sony has announced that indie developer Curve Studios' Stealth, Inc. - called Stealth Bastard Deluxe when it was released on Steam last November 2012 - will be hitting PlayStation Network on the 23rd July. The game will be available as crossplay; gamers will be able to get it for both PS3 and Vita for one price.

Curve Studios has announced that their action platformer-puzzler, Stealth Bastard Deluxe, will be landing on Steam later today. 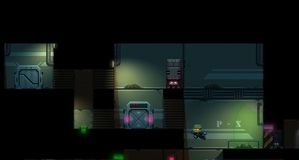