Those of you who fancy a bit of a punch-up this weekend will be glad to know thatUltra Street Fighter 4 is available to play for free on Steam this weekend.

The brawler, which is an updated version of the core game and the fourth update to Street Fighter 4 overall, features various tweaks and adjustments based on community feedback, plus a few new modes.

Capcom details Omega Mode and other goodies in patch 1.04 for UltraStreet Fighter 4

Omega Mode is coming to Ultra Street Fighter 4 on PC this December, mixing up the kicky punchy action by giving every character an all-new set of moves.

Now Capcom has detailed what else is on the way in patch 1.04, including new Training Trials and an online Edition Select for matching together various different versions of classic fighters.

Cartoony brawler Ultra Street Fighter IV is getting a chunky new PC patch, which aims to fix a few bugs and sort out the game's rather irritating connection issues.

Those issues are mainly a result of the dread changeover from Games for Windows Live to Steamworks. PC players have been suffering patchy online play since the transition, and Capcom's been paying attention.

Capcom revealed two new modes that will be included in Ultra Street Fighter IV, which will be released on PC, Xbox 360 and PlayStation 3 in 2014.

Capcom has revealed in a new Unity blog that the PC version of Ultra Street Fighter IV would be coming in August, both as a $14.99 USD upgrade and as a full game for $29.99 used. 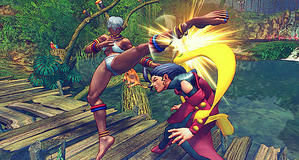