Today I Learned: PC Liquid Cooling isn’t as scary as it sounds

I just got done installing my first-ever Liquid Cooling setup for my Processor on my PC – and was pleasantly surprised to find that the process behind ‘water’ coolers isn’t anywhere near as terrifying – or potentially PC-ruining – as the name and hyperbole surrounding the topic might lead you to believe.

I’m no PC-building genius. I’m savvy enough to throw together a machine of my own, but higher-end stuff has always eluded me. One such area has always been liquid cooling – even the name evoked unrealistic images of a sprung leak leading to some catastrophic short circuit to my mind – but I’ve finally taken the plunge. 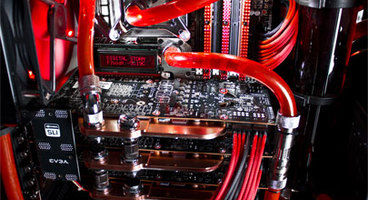 Liquid cooling doesn't have to be this complicated.

In my quest for a quality PC gaming rig at a reasonable price, I made the decision recently to simply overclock my current Processor rather than upgrade to a new one at a much greater expense. Overclocking meant more heat – and that combined with the fact that the weather is slowly warming up inspired me to evaluate the cooling solution on my PC, which is used for intense video processing and other tasks in addition to high-end gaming.

I’m a big fan of my case, the Corsair Air 540, and have had great success attaining a great airflow and low temperatures off it. In spire of that, I wanted to go lower, and I also wanted to try to reduce the noise level too. Challenge accepted, then – by the end of my tinkering, the case now features three 120mm fans as ban intake at the front, two 140mm fans taking care of the liquid cooler’s radiator, and one final 140mm fan at the rear.

For cooler, I was shifting from a traditional air-based Cooler Master setup to the liquid and radiator based Corsair H110 Liquid CPU Cooler, which despite being greatly simplified still looks and sounds quite a bit more intimidating at a first glance.

The Pros of Liquid CPU Cooling solutions are pretty obvious: it’s quieter, it’s cooler, and it’s actually a damn sight neater – the plate that attaches to the CPU to transfer the heat is flatter and simpler than a large fan, with the coolant-filled cables long enough to allow the radiator to be placed more out of sight. In the roomy Air 540 space was never much of an issue, but now the view through the case window is far neater and slicker.

The cons are equally plain: a glance at prices reveals that even the cheapest, simplest liquid options start at double the price of entry-level gaming-spec air coolers. In smaller cases space can also be an issue, with some of the radiators for coolers large enough to cause an issue since they need to actually be mounted to an area of the case. 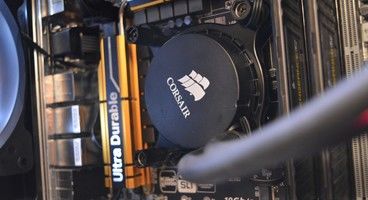 My setup was plug-and-play and headache free.

Once upon a time Liquid Coolers were far more complicated things, with hardcore PC gamers creating them from scratch. Custom set-ups are complicated and intense, and that’s where my thinking that water cooling was daunting came from – in this, the H110, a self-contained cooler that’s essentially plug-and-play, is a godsend.

At the loss of customization, liquid cooling becomes a simple proposition. As with any cooler, you apply the back plate, then the liquid block, then plug it into your motherboard’s CPU fan slot – the only difference is that you then must find space on the case for your radiators. If you’ve ever dropped a blob of thermal paste on your CPU and applied a fan before, this is no more difficult.

For somebody like me – comfortable with many aspects of PC-building but not so much that I’m willing to dabble in the truly complex – this is a perfect solution. I may not be able to cool components other than the CPU and have nifty looking, brightly-coloured liquid pumping through the tubes, but my PC is running cooler and quieter than ever – and the installation was stress and panic free. Bottom line – PC building just keeps getting easier. Excuses are drying up!

The Corsair H110 is available via eBuyer and Amazon.