Today we talked with Ascaron Representative Daniel Dumont about Darkstar One

Daniel Dumont: My background and experience is all within this area, and I have numerous other games in my “project lead portfolio”. As the project lead for DarkStar One I have worked on the title on a daily basis, from concept to completion.

Strategy Informer: We've heard about some of the features of DarkStar One, is there any we don't currently know about that you'd like to share?

Daniel Dumont: We have not divulged all of the secrets of DarkStar One. Some are deliberately kept quiet as the twists and surprises will offer an even greater reward to the player. It is imperative to have items within a game that allow you to pleasantly surprise and shock the player. This not only “stimulates fun”, but it also provides the vehicle for driving the game forward.

Daniel Dumont: The engine used in DarkStar One has been developed by Ascaron over the past few years. The focus for DarkStar One was on creating a colourful and interesting universe with stunning special effects, a wide variety of materials giving each alien race a unique look and feel, and realistic and attractive lighting/shadowing for the space setting. We also created some special shaders for planets with atmospheres and meteoroid fields (which consist of a practically infinite number of meteoroids that can be destroyed) Additionally, the use of post-effects gives us the possibility to change the look of the game to suit the current mood.

Our engine supports all modern Shader technology and HDR light settings. We also have technology in place to allow for the lower end graphics cards, like the GeForce4200-series, to run the software.

Strategy Informer: What kind of support to you plan to give once the game is released (additional mods, maps, expansions)?

Daniel Dumont: DarkStar One will have an active community base. From here we plan to keep up to speed with all the feedback from the DarkStar One gamers. There will, of course, be secrets and other items to divulge as the community grows and begins to demand these hidden aspects. Discovery and adventure still fall within the heavy action and deep story telling of DarkStar One.

Strategy Informer: Can you tell us about the single-player aspect of the game?

Daniel Dumont: The player picks up the story from the point where Kayron receives the terrible news about his father’s death, whilst also being awarded a highly advanced space craft; the DarkStar One. Early on Kayron will discover more information which focuses on his father’s work and how he became embroiled in a plot far greater than it first appeared. The resulting murder and clues left behind will propel Kayron through the initial parts of the story, and unveil new allies and enemies in his quest for truth. This key story line is a driving force behind the beginning stages game, and provides the basis for a story that will grow, twist and turn, offering numerous surprises along the way.

A lot of games with good stories have the problem where the user only has short term goals. At the end, the user may have seen a very nice story, but lots of small stories in the beginning don’t give real clues to the user of what the story is about. This reduces the dramatic possibilities. In DarkStar One, we have an almost omniscient threat and two other stories running simultaneously. Within the story the user always has three goals at a time: a short term goal telling the user what to do next (e.g. fulfil a certain mission to get information or a special weapon), a medium term goal (e.g. find the murderer of his father) and a long term goal (the big threat). As the user discovers how the various story sections cross-over and link together in different ways, a compelling tension is created.

DarkStar One offers entertainment in all areas, whether out-and-out action, a thrilling story, interaction with new contacts, trading, bounty hunting, and various strategies to be employed within these areas. For example, the player can choose to employ piracy as their main source of income. As a result of this the player might become a target for the police, or even a target for bounty hunters looking for their prey. In either case, the player will need to think fast in terms of their activities and actual combat. Perhaps it would be wise to vary their course to elude the police and bounty hunters, or opt to alternate systems in order to ply their piracy trade, or maybe undertake the occasional reputation-enhancing mission to throw off unwanted attentions. In combat, the player will face a range of flight and attack-defence strategies. Different races and enemies will have diverse weaponry, an assortment of fighting styles, as well as varying aggression towards the player depending on the decisions and game path that have been taken.

Strategy Informer: Can you give us an assessment of the health and long-term viability (overall replay value)?

Daniel Dumont: The replay value is governed by a number of factors:

Firstly, DarkStar One comprises a huge universe of over 300 systems. Whilst the story will take the player through various systems, it will not guide the player through them all. There are many bonuses amidst those 300 plus systems, but in order to find them you will have to embark upon a little adventure of your own.

Secondly, the physical upgrade capabilities (as in hull, wings and engine) of the DarkStar One allow the player to effectively design their ship according to their own preference of playing style. This means that every play through of DarkStar One can be a massively different experience simply through the upgrades you select for your ship (therefore affecting how your ship handles and how you respond to enemies and vice versa).

Alongside the ship upgrades you also have hundreds of equipment items and weapon types. More light lasers? Fewer high power lasers? Missile launcher? A combination? What about a generator? And would a docking computer really be worth the investment? Do I really need to carry more cargo? The questions asked of the player through the equipment options on offer are what make up an exciting part of the game.

In addition to the ship upgrades (physical and items/equipment), there is also the plasma cannon (or “spell weapon”) which “grows” in an RPG manner. The plasma cannon capabilities are derived from a skill tree from which the player selects their chosen ‘leveling’ path, thus giving the player control over their choice of function and power for the plasma cannon.

Thirdly, there is the career aspect of DarkStar One. The game actively and dynamically tracks and represents your career. If you set out to destroy escorts, freighters and other innocents, then you will soon become known as a killer. This is graphically displayed in the players log book, and can be accessed at any time. There are pros and cons to each of the careers, and as each career is dynamic in its own right, there is an added element of realism. Not only will your career ‘choice’ (it is a choice, as your career is based on the way you play) have a direct relationship with the way AI ships respond to you, it could also have a profound effect on the missions you take and the systems you visit - there are 3 different government types, and it is quite feasible that your reputation will precede you and in some circumstances your welcome in certain systems may become somewhat, shall we say, volatile.

Strategy Informer: Could you tell us about the weapons and ships that will be featured in DarkStar One?

Daniel Dumont: Each of the 6 different races has a range of ships and weapons which are specific to their race. Furthermore, each race has its own “combat style”. In gaming reality, what this means is that you no longer have the tedious “fly forwards, lock target, shoot forwards, destroy target” action gameplay. For example, if you come up against an enemy ship laden with multiple turrets, you can be sure they’ll try and maneuver into a position where their turrets can unleash their fury and puts you in the position where you either cannot see your opponent or your ship isn’t equipped to target the opponent in his current position. So, your choices become paramount to survival… it is not just a case of out-gunning your opponents anymore, but out-thinking and out-maneuvering them as well.

Strategy Informer: As a gamer, what's your favorite part of DarkStar One, what makes you proud to have helped create it and why is it any better then the current Space RPG games out there?

Daniel Dumont: It would be wrong to think of DarkStar One as purely a Space RPG. Instead, it is more of a “Space Opera”. We have strong characters, special missions, an evolving and twisting storyline, surprises for everyone, added bonuses and rewards for the more demanding and adventurous pilots… DarkStar One is a game of depth, detail and devastating gameplay.

Strategy Informer: Do you think it's likely we'll see some changes to the current release date (August 14, 2006)?

Daniel Dumont: DarkStar One will definitely meet this release. We have been in testing for many months now, and are perfectly on schedule to attain this release date.

Strategy Informer: Is there anything you'd like to say to the DarkStar One community before we wrap this up?

Daniel Dumont: It’s been an interesting project to develop, and a whole lot of fun. Would I like to produce a sequel? Yes, but that is largely in the hands of the community and how they receive DarkStar One. Overall, the best thing for me is the response of the testers – they have been incredibly positive, and the surprises we built in have had the desired effect. In short, DarkStar One is an absolute blast! 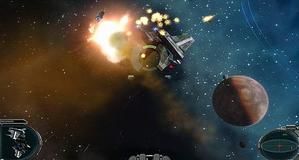