Scott Thunelius: My name is Scott Thunelius. I’m the ‘solo developer’ for my indie setup Liberation Games.com. I’m the artist, programmer, creator of giant flaming bears, and everything in between for my first big production Kingdom Elemental. I've teamed up to battle the forces of evil with Chronic Logic.com, who is publishing and distributing the game. They have been great to work with and we are both working hard to ensure the game is as amazing as possible.

Strategy Informer: Where did the idea of making Kingdom Elemental come about?

Scott Thunelius: When I was in middle school, I often decided to draw ‘battle scene’ pictures in class instead of doing schoolwork. I was usually so bored in class; I ended up doing these every day. After half a year of drawing these pictures, I turned it into a game. It was very basic, and since the ‘arena’ was a tiny sheet of binder paper I was restricted to making these fights take place in a very confined space. The battles weren’t involved, but as time went on I gave the fighters skills, and soon I had other (equally as bored) classmates playing the game, passing the paper back and forth when the teacher was not looking. Many years later, I looked over all the old papers and decided that the paper game was so good; it needed to be a computer game. After having been influenced by mainstream games like Myth, and Warcraft I refined the game mechanics a bit to work in real-time and set to work.

Strategy Informer: Is there any features of Kingdom Elemental we don't currently know about that you'd like to share with the world?

Scott Thunelius: The game has a Giant Flaming Bear, Pirates, Ninjas, Doom Scorpions, and units that burst into dance for no apparent reason. Essentially, it is the best game ever.

Strategy Informer: What can you tell us about the graphical features?

Scott Thunelius: Visuals are extremely important to me. I need a game to look good. That, however, does not mean I need everything to come equipped with normal maps that make every object in the game to look like it just got splooged on by a generous helping of overly-reflective goo that glistens in the ultra-exposed, over-bleeding HRD sun. Where every stone in the world needs to spend at least 16 hours in Z-brush to make sure it attains an unparalleled level of realism never before seen to the eyes of the reality-loving public. Hey guys, here’s an idea: Walk outside.

I put a huge amount of work into the details of KE, but realism was never a priority. After all, I have large combustible bears running around with a trail of fiery death flowing behind them; realism took a back seat quite a while ago.

I’m the only one doing all the art in the game, and I am trying to get everything done in a somewhat timely manor, so it is quite the challenge to keep everything at the level of quality I would like it to be. However, I think the game is looking awesome. I have always loved Blizzard’s Warcraft series, and the art style in those games is simply fantastic. A lot of the bright colors and low-poly style of KE is based on WC3, but I wanted it to look a touch less cartooney, so the units have less exadurated features. I think it works pretty well.

Strategy Informer: What kind of support do you plan to give once the game is released?

Scott Thunelius: At this time we are not directly planning any expansions or add-ons, though there is a good possibility of an expansion set or feature patch if the game is well received.

Strategy Informer: Are you planning to release a demo for Kingdom Elemental?

Scott Thunelius: Yes, there will be a complete demo for the game.

Strategy Informer: Can you tell us about the single player aspect of the game?

Scott Thunelius: The campaign mode spans over 4 unique fighting zones. The campaign is driven by a main storyline, which the player is more or less removed from. The fighting aspect of KE has very little to do with the storyline, but after each level is beaten players are treated to a cut scene which moves the story along. Also, each unit has a small snippet of information on their interface bar, which players can read if they want to get more backstory on the individual units. I tried to keep the game very light on the storyline part of things, simply because the game is about tactics and not about listening to 2 hours of storyline. If I wanted that, I would have made a movie and not a video game. Also, the game doesn’t take itself too seriously. Players will find overtly placed easter eggs everywhere, as well as inside jokes from other games.

Strategy Informer: Will there be multiplayer support? If so, could you tell us about it?

Scott Thunelius: At this time we are not planning a multiplayer mode for KE. However, the idea of engaging in fierce piratey battles over the interwebs makes me happy in the face - so it may be released in a patch, or perhaps in an expansion.

Strategy Informer: Can you give us an assessment of the health and long-term viability?

Scott Thunelius: In addition to a full campaign, spanning over 50 dynamic waves, the game has a ‘skirmish’ mode to keep things fresh. In the skirmish mode players can fight randomized battles in a small, contained space. However, to use heroes in skirmish mode, the player must unlock them in campaign mode. Also, the campaign mode will offer special ‘challenge modes’ once the game has been beaten. This should keep the replay value of the game pretty high.

Strategy Informer: Could you tell us about the Characters that we'll see in the game?

Scott Thunelius: One of KEs best features is its variety of heroes. No hero is the same, and each has a different style. Some units can only be used in one way: for example, the cleric is strictly a healer. But some units can be used in various ways; you can use the druid as either a support unit, or a damage unit. The heroes are very much based on classic fantasy (think Jack Vance books) so you’ll see names you’ve seen in other games before: necromancer, monk, bard etc. However, the way these characters are used is quite unique to Kingdom Elemental, which is what makes sure the game feels new.

Strategy Informer: Could you tell us about some of the spells we'll get to use?

Scott Thunelius: Every hero has 3 skills/spells, so there are about 36 completely unique skills. Each skill is catered to the hero, so for example, the swordsman is a damage soaking unit, and he has a block skill which has a 1 in 4 chance of deflecting all damage. The bard is much less defined, and has a damage song, a heal song, and a speed song. This lets the player pick what type of unit they want to use her as. The cleric unit is all about healing and can do individual heals, group heals, or can even bring dead heroes back to life. There are also spin attacks, fire arrows, thorn shields, the ability to steal life from a target and give it to the caster and even to raise skeletons from the dead and use them as your own slaves.

Strategy Informer: As a gamer, what's your favorite part of Kingdom Elemental, what makes you proud to have helped create it and why is it a game fans will want?

Scott Thunelius: The game is so simple to play, yet so hard to master. There are so many different tactics one could use to complete a round, there are no right or wrong combinations. The player can get very creative in the way they use the heroes, and as many times as I have played the game I’m positive players will find combos that I have not yet tried. The game really gives you enough options to cater to any playing style, yet remains so simplistic and easy to understand. I aimed to make the game all about fighting the enemies, and not the interface or keyboard. Because of this, the game allows you to pause mid-battle and assign orders if things get too crazy. Also, the game comes with full keyboard support, but if keyboard-based games freak you out, players will be happy to know they never have to touch the keyboard if they do not want to. All controls are available on the interface and mouse.

Strategy Informer: What's the currently release date and is it possible we may see some changes in the future?

Scott Thunelius: We are aiming for around October, this year. And yes, the game is still changing all the time. The overall mechanic is in place, but some of the more specific aspects are still being refined.

Scott Thunelius: I love doing everything myself. If anything about the game sucks, it was 100% my fault, I can’t have ‘bad team management’ be my obligatory scapegoat. I’m in full control over the outcome of the game, if any part of the game looks a particular way, it’s because I wanted it to. There is no way my ‘artistic vision’ was not correctly conveyed through an employee since I’m doing all the jobs. However, it is a huge amount of work. Too keep pushing through the massive workload is sometimes pretty hard. I can’t just pawn a walk cycle off on some artist because I’m not in the mood. There are a lot of characters I loved making, and many that I absolutely hated. Pushing through the annoying parts has been the hardest part so far.

Strategy Informer: Well we've come to our last question, is there anything you'd like to say to the fans of Kingdom Elemental which are eagerly awaiting the release of this great looking RTS title?

Scott Thunelius: Your giant flaming bear is almost here! Thanks strategyinformer.com for having us! 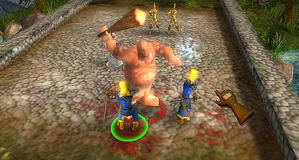