Pirates of the Burning Sea

Mike Bowden: Thanks for agreeing to this interview and congratulations on the release of Pirates of the Burning Sea! Firstly, I read that the development process has taken literally years. What has taken the longest time overall and why?

Joe Ludwig: In fact, the game has been in development for over five years. It’s been a long road!

It’s the iteration that takes all that time. Our ship combat system, for instance has seen 7 major overhauls over the years. Often you just can’t know how well something is going to work except by trying it and improving it from there.

Mike Bowden: What was the inspiration for the game? Was it Johnny Depp or have Pirates always been cooler than ninjas in your eyes?

Joe Ludwig: While Johnny Depp is certainly an inspirational pirate, we actually started the game before his movies were announced. In fact, I think playing a pirate did great things for Depp’s career.

Mike Bowden: Tell us about exploring the ports. Will you be able to get off the ship and visit local shops selling eye-patches and swash buckles or is it mainly for new cannon balls and ship repairs?

Joe Ludwig: Absolutely! Pirates of the Burning Sea features more than 80 ports scattered all over the Caribbean. In these ports you can visit the auction house, interact with your economic structures, accept missions, outfit your ship, or visit the tailor. For a truly stylish pirate, that last one is the most important by far.


Mike Bowden: A question about game play, when one is offline (we all need to sleep and eat sometimes) what safe guards are in place so that your ship and crew don’t get plundered and blown out of the water?

Joe Ludwig: When you are offline your ship disappears from the world, so no one can attack you. The same thing happens when you enter a port; your ship leaves the world so that you don’t have to worry about getting attacked while you’re getting your new outfit.


Mike Bowden: The player-generated content system promises to let players create their own ships and flags designs. What other options are available and how will the type of ship you create affect your game?

Joe Ludwig: Our player created ship program allows players to contribute historical ship models to the game. At launch 30 of the 58 ships in the game were created by players. These ships are available via the economy to all players in the game. And we continue to add new player ships going forward. Two new player ships will appear in our 1.2 patch (which is due to hit the live servers in March.)

Sail and flag customization is the second avenue for player created content. Any player can upload a flag or sail pattern to www.burningsea.com and have the community vote on it. Patterns that pass the vote are made available that player in the game. They can be traded with other players at that point, used as a guild flag, or whatever the owner of the pattern wants to do. You can find more information about our User Content program by visiting this link to our UC forums: http://www.burningsea.com/forums/forumdisplay.php?f=16.

Mike Bowden: A pirate isn’t a pirate without a sword and a large cannon on his ship. Are these weapons upgradeable? If so, how does this process work, do you get more powerful as you level up or do you have to source the heavy artillery as you progress through the game?

Joe Ludwig: As you level up you get access to more powerful ships and a broader array of skills. Pirates of the Burning Sea doesn’t take a player’s level into consideration when making combat calculations. This means that while a player at level 50 is always going to win a one-on-one fight against a level 30 player, three level 30 players will pose a serious threat against the same level 50 player.

Ships can also be modified with outfitting for more upgrades. This system allows players to customize ships to better match their preferred play style, as well as provide economy players with more goods to sell.


Mike Bowden: What future plans have you got for the series? Will we see expansion packs in the future or new weapons etc?

Joe Ludwig: While we haven’t announced any plans for a paid expansion pack, there will be one in the future. Right now we are hard at work on free content updates. The first major content update will come out in March and feature new epic mission content, a new town, new enemies, and a large number of UI improvements. We think it will be a big hit with our players. Keep an eye on www.burningsea.com over the next few weeks for all the details.


Mike Bowden: Talking of playing the game, beta testing is always a great help for developers in ironing out bugs and glitches etc. What was the most prominent fault that the beta testers found and how difficult was it to put right, or did the beta test go pretty smoothly?

Joe Ludwig: Although we found many bugs in beta the most important of them were the ones that only hit when thousands a players are playing at once. Beta, particularly open beta, found tons of these bugs before we launched. That allowed us time to fix the servers before our retail launch and has really helped keep things stable. That made all the late nights fixing the beta worthwhile.


Mike Bowden: So, with the current glut of MMORPG’s that are out there right now, why should our readers choose this one in particular? What sets it apart from the rest?

Joe Ludwig: The biggest thing that sets Pirates of the Burning Sea apart from the competition is our historical setting. There are a lot of MMO players out there who are sick of the standard Orcs and Elves fare and ready for something different. We’re there to provide an alternative.


Mike Bowden: What element of the game are you most pleased with? What feature gives you a kick every time you see it/play it etc?

Joe Ludwig: That has to be the ship combat system, hands down. Through those 7 iterations on the combat system it got better every single time, and now it’s really our rock star feature. Every time I read about somebody’s epic PvP ship battle where they snatched victory from the jaws of defeat through a combination of determination, skill, and a little luck, it makes me smile.


Mike Bowden: What plans have Flying Lab Software got for the future in general? Will you concentrate on improving Pirates of the Burning Sea for the foreseeable future or have you got anything else up your sleeves you’d like to share with us?

Joe Ludwig: Just pirates for now. Even after five years there are plenty of things we still want to add to the game, so that’s what we’re going to concentrate on.


Mike Bowden: Finally, we’d like to thank you for taking part in this interview and wish you every success with the game. However, we have one last question, how many times in the game does your character say, AAAARGH?!

Joe Ludwig: What, you mean per hour? I lose count so quickly.

Pirates of the Burning Sea Essentials 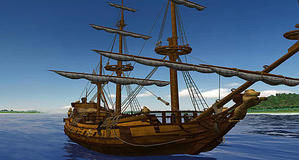 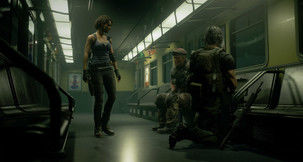 Pirates of the Burning Sea Review