We came, we saw, we interviewed

28 August 2012 | By Import
Of all the games I’d want to be announced this year, Rome II was definitely one of them, and what an announcement it was. It went a bit too far with the live action-trailer, but hey, Creative Assembly know they’re onto a winner with Rome II, now all they’ve got to do is not mess it up. To that end, after seeing the announcement demonstration that everyone else has already seen, we sat down with James Russell to try and dig a little deeper:

Strategy Informer: In your initial presentation you guys were very keen to hammer-home how better things were looking from unit games on the ground, and there’s been talk of adding in gameplay incentives to draw players to these more personal battles. What does this mean though? Do you not want players playing from the top-down view anymore?

James Russell: I wouldn’t say we wouldn’t want players to be playing from a top-down view, what we don’t want though is players using the tactical map too much. That’s not really what gives you a feel for the battle; it’s little more than an orientation tool. But in terms of playing the battles, I think you’re obviously going to have the traditional camera view as the dominant mode in gameplay. But this idea of humanising how the battles look and feels close up, for me it’s just a way of making them more real. We’ve had these unit level cameras for a while, and we’ve been experimenting with how they work – and we’ve found so far that it’s purely cosmetic. Players won’t really go there unless they are having a breather from microing the larger battle. So we want gameplay incentives for going down to unit level, but we wouldn’t want it to unbalance the game.

Rest assured that what it DOESN’T mean is that if you’re to play the optimum way to win, that you have to keep jumping between unit cams or anything like that.


Strategy Informer: If you could help clear up a point for us about armies and unit: you’ve mentioned in earlier interviews that you want player to think in terms of ‘Legions’ now in terms of individual armies, yet in the demonstration the units were being controlled individually, like very Total War game has done.

James Russell: Let me clarify that – on the battlefield you can put units into groups, and give them AI orders like ‘Attack this’ or ‘Defend this’ etc… but what I was talking about there, about focusing the players army management, was actually something for the campaign map. On the campaign map we don’t want to the player to be thinking about things like “oh, I have to get that unit of archers half way across the world to join up with that cavalry unit” we want them to be thinking stuff like “oh, where’s the Tenth Legion? It needs to come up and reinforce me here”. Obviously player can still customise their armies/legions how they want, but it’s something that we want to do to make sure the gameplay is manageable, and that the player focuses on interesting decisions throughout the game, rather than focusing on micromanaging lots of individual units, especially considering the world is a lot bigger now.

You’ve read about the province system, right? It’s similar to that. Obviously there are hundreds of regions now, but we don’t want payers to making individual choices for each of them. We thought it would be more fun if they managed the province those regions were in instead, which is what a real Roman governor would do.

Strategy Informer: The team have talked before about how they’ve felt one of the main mistakes with Empire was trying to do too much all at once. One of the reasons Shogun 2 worked so well is that it just focused on the Japanese island and had some good detail. Are you guys ready to go back to a map as large as Europe?

James Russell: I think we learned a lot developing Shogun 2 about polishing gameplay and focusing it in, and I think we’re ready to take those lessons and roll it out to a grand scale again. I think what makes this more accessible than the gameplay in Empire is that the world in Empire was big, but it was also cut up into several theatres.

With Rome II, the map is going to be one large single space, but the key difference is that in the 18th century world that we portrayed in Empire, everybody knew where everything was, so you had the whole world portrayed right that in front of you. At the same time the period, I mean you didn’t start small you started off with the British Empire.

In Rome II though, even though you’ll have this big map you will start small. I mean Rome herself will only start with a couple of Regions (Ed: or provinces, the terms feel a bit interchangeable at this point), it’s very early days of the republic. You can’t see the huge intimidating scale of the world, so you get to build your empire up from the ground and I think that means that you might not have the same problems with orientating yourself. And of course, you’re not necessarily going to get to see the whole world just playing as a single faction – we want lots of replay value, so if you’re playing a Rome you might only exist in one part of the world, but if you play as someone else you might exist in an entirely different area.

It’s a big world but I think we’ll be able to deal with it, and it will be one of the cool things vs. Shogun 2 is that we can take the variety to another level. Completely different cultures and environments, different style, and that just makes the gameplay more dynamic.


Strategy Informer: Are you doing anything new with neutral factions? Even in Shogun 2 some of them felt a little bit like they were just single province entities waiting to be knocked over.

James Russell: Well if you go back to the original RTW, you had your factions and then everyone else was just ‘Rebel’. We do try to make sure that every single – even small factions – are properly represented. So what I would say is that many of them are fully fledged factions in their own right. Some are more passive, but absolutely many of these factions could do anything, but obviously the major factions will have more assets.

Strategy Informer: The modding community have kept the first Rome game alive as much as anything else had, have you been inspired by anything you’ve seen there?

James Russell: I think we’re aware of the mods, we look at them and think “wow, those guys do some pretty cool stuff”. In terms of the game though, things are a lot more complicated than they were back in RTW’s day, it was all just text files back then. We’re going to try and do our best to keep supporting them – we absolutely understand that these people put so much time into the game, and come up with ways to keep it fresh and interesting. We’re even having a modding summit soon to bring a load of modders in for a chat. We do struggle against our own tools though sometimes, we’ll do our best though.

Strategy Informer: Prior to the announcement of Rome II, there was a lot of talk of perhaps games being set in other areas, like South America or China. Obviously many of the fans wanted Rome II, but what influenced your decision, in the end?

James Russell: I think the time was right – I mean it’s going to be nine years soon since the original game, and it had been building for a while. Shogun 2 I think was right for the time as well, we wanted to move away from Europe after Empire/Napoleon, and we really wanted to focus on something smaller and now I think we’re ready to tackle this huge ancient world again.

Yeah, I think every title we think about what we want to achieve with the engine, with the game, and we choose… we have lots of debates… in a way each game has its reasons. Empire was all about naval battles, Shogun 2 was about focusing the gameplay and polish. And now Rome 2 is now the perfect vessel to show off the more human face of war, it’s got the heroes and legends, and we can really showcase that.

James Russell: I think on the campaign map, absolutely, we want to focus the game on a cast characters – it’s not going to be like an RPG or anything where you follow a single person, we want a wide cast of characters, and you can have rival characters and rival families, and this idea of jockeying for position; what we want to do is weave these storylines that are character based through the gameplay. Like the dilemma system in Shogun 2, we want to weave these into Rome II and have chain dilemmas and so on. They’re not fixed though, but they’re based on how you play the game and evolve depending on how you react, so I think we’re going to see a wide range of character sand agents.

It’s like with diplomacy as well – we want to humanise that more and make it more understandable – to understand why the AI does what it does, and I feel that if you understand things like that, you’ll feel more a part of a living world.

Thanks to James Russell for taking the time to speak to us. It’s still very early days for Rome II, but we look forward to hearing more from the guys at Creative Assembly soon. 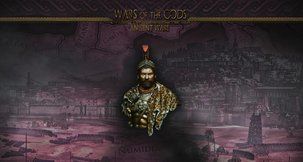 Reinvigorate Total War Rome 2 with the... 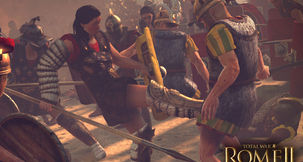 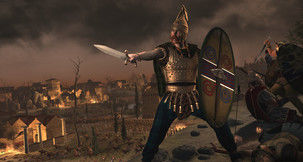 Found the Roman Empire in New Expansion for...