24 April 2012 | By Import
We got the chance to chat to EA Sports’ UEFA Euro 2012 game’s Lead Producer Sebastian Enrique ahead of its launch this week to find out a little about the process behind making the first ever major downloadable expansion for a FIFA title. He chats about licensing, the new mode, and why the game systems are the same as FIFA 12’s.

Strategy Informer: So the obvious question is about the decision to make this DLC – can you give a bit of insight into the thought process there?

Sebastian Enrique: On one side we have FIFA 12 – a massive user base, more than 10 million units sold, more than 1.5 million people playing FIFA every day. We also have a lot of fans saying that they want DLC for FIFA between releases, they want to expand and renew the FIFA experience.

Put those two things together – seeing the huge amount of people that play FIFA and the fan requests for DLC, something like this – it makes sense for us to try something like this and see how successful it is. It’s a big thing for us – changing from a full retail product – a full video game that’s full price to a DLC that’s £16 – it’s a huge difference.


Strategy Informer: How was it taking that idea to the licensees, to UEFA and people like that?

Sebastian Enrique: Oh, it was tough! [laughs] Trust me, it was tough. They have a lot of restrictions that we have to live with. For example many people ask me about cross-compatibility; if they can use the Euro teams inside FIFA and the FIFA teams inside Euro. The answer is no and yes, depending on what.

Why – because UEFA and FIFA are two different organizations, and they have completely different sets of rules. It was hard, but to me it was worth it.

Strategy Informer: I’m really curious about the new Expedition Mode – can you tell me a little about how that works, what it is and so on?

Sebastian Enrique: On one side we have the online tournament, the offline tournament, the challenges... but we wanted to offer something that was a different experience. With this being a national experience we wanted something that could show off national pride. We thought about what we could do – like a captain your country mode as we had in previous games, but we said no because I as an end user didn’t want to play the repetitive same thing.

So we wanted to work out a new game mode that provided the long-term play with a different metagame – something completely fresh, never seen in football. We started thinking about what kind of ideas hadn’t been done before that we could integrate into the FIFA family.

This was an idea we’d had for quite some time – doing a metagame that had strategy elements, like strategy games, mixing that into the world of football. That’s what we did with expedition – it was the perfect opportunity, because at the same time as playing through the metagame with strategy elements and such you’re also journeying through Europe.

In that, you get to know the players from the different nations. It’s good for UEFA as well, as in this mode people can get to know the UEFA world and UEFA players, not just Spain, England, Germany.

Strategy Informer: None of the stuff in this has any impact on Ultimate Team. That’s a pretty lucrative market, so why did you skip it this time? Was that down to a licensing or design decision?

Sebastian Enrique: It was a little bit of everything. On one side expedition also has you building a team and has similar elements, but Ultimate Team is more about the market, the trading and the quick rush – less about tournaments. We wanted to separate from that, so we concentrated on the metagame and not on trading but still on assembling a team.


Strategy Informer: You’ve added all these new modes, teams, kits – did you make any tweaks to the underlying core game, or are the changes all on the aesthetic sort of level?

Sebastian Enrique: It is at it was in FIFA 12. There are two things you need to take care of – one is not breaking FIFA 12, which is a great, award-winning game. Fixing all the stuff is not as easy as one might think with DLC.

On the one side we have, like, okay – we have this limited amount of time, this limited amount of resources – it’s trying to make the best decision. If we had spent that time and resources improving gameplay it would’ve been like FIFA 12.2 – we decided to just spend that .2 of time and resources to create an overall better game. Instead of making mediocre tweaks to the existing experience, we decided to spend that time building new things around the existing experience. 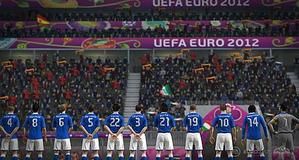