01 May 2008 | By Jamie Davey
It seems the plucky developer isn't going to settle for a new lick of paint on the wall for Portal's sequel.

Valves Doug Lombardi proclaims "we're not just going to pump out more and cash in on the success of the first one." Take that marketing!

"We see it as a challenge to really innovate. If Portal was so innovative that it won all these GotY awards, then Portal 2 has to be even more so."

It certainly got attention for its weirdness, which Valve has almost trademarked as a core design pillar of their games, and we love them for it. Portal 2 won't be in the gamer space for quite some time if they plan all this innovative hocus pocus.

"We could have quickly put out Half Life 2 in 18 months. It would have been on the same engine and been a reverse run through Black Mesa. But that's not our style", continued Lombardi.

"I don't think it'll be six years until you see the next Portal, but it will definitely not just be seeing Portal with different coloured textures."

"We're doing a lot of R&D to find out what's going to live up to that promise. When you think Portal you think about really innovative gameplay, clever writing and really dark humour. So how do we take that and follow up upon that idea, rather than just cashing in on it?" 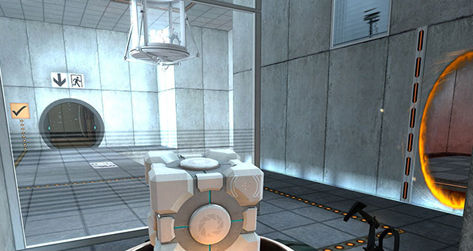