03 March 2008 | By Jamie Davey
Iron Lore Entertainment, developer of Titan Quest, has had to shut its doors much to the despair of Michael Fitch, Creative Director at THQ. He posted his frustrations on the Quarter To Three Forums with a lengthy rant (1,722 words).

No prisoners taken -piracy, hardware vendors, customers and reviewers all get their share of Flitch's wrath.

Titan Quest suffered from a bad word-of-mouth reputation as a lot of gamers complained of crashes, which apparently were triggered by security protection checks that ran throughout the game. With the game reaching the pirate scene before even hitting retail crash-to-desktop (CTDs) errors were thought to be huge bugs but not so.

As pointed out by some on the discussion forum however, if they had bothered to code in a message to gamers telling them their kick back to desktop was the security checks detecting cracked software then this bad reputation could have perhaps been avoided?

"...the game was pirated and released on the nets before it hit stores. It was a fairly quick-and-dirty crack job, and in fact, it missed a lot of the copy-protection that was in the game. One of the copy-protection routines was keyed off the quest system, for example. You could start the game just fine, but when the quest triggered, it would do a security check, and dump you out if you had a pirated copy. There was another one in the streaming routine. So, it's a couple of days before release, and I start seeing people on the forums complaining about how buggy the game is, how it crashes all the time. A lot of people are talking about how it crashes right when you come out of the first cave. Yeah, that's right. There was a security check there."

Fitch also complained about the general stupidity of customers who don't even bother to keep their drivers up-to-date or keep their systems maintained with de-fragmenting drives or employing decent anti-virus/spyware to keep systems clean.

One reviewer went through the game without discovering the teleport system and then wrote a review complaining how tedious having to travel around Titan Quest was, hurting its score.

"Making PC products is not all fun and games. It's an uphill slog, definitely. I'm a lifelong PC gamer, and hope to continue to work on PC games in the future, but man, they sure don't make it easy." 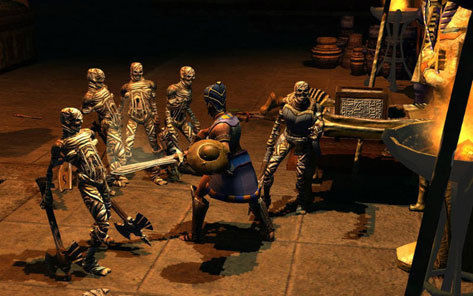