Tom Clancy invading the skies with 'HAWX', featuring over 50 jets

03 April 2008 | By Jamie Davey
Ubisoft had an unnamed air combat game announced last year but now it can be confirmed as Tom Clancy's HAWX. It will have a single player campaign with support for up to 4 players in co-op mode.

It uses an "Enhanced Reality System", which if switched off will give greater freedom but make the game much harder.

It'll be interesting to see what Ubisoft's spin will be on a world at the mercy of private military companies in 2012. Ubisoft Romania which handled Blazing Angels is developing HAWX, let's hope the modern setting will kick things up and bring some crazier jet-fuelled antics.

It'll be nice to visit a hypothetical future for a change in an air combat game, Fires of Liberation was set in a weird fictional state and even the Deadly Skies series went insane plot-wise in the end. Hopefully with a 'realistic' Earth setting HAWX can blow them all away.

It's coming to Xbox360, PS3 and PC sometime this fall. 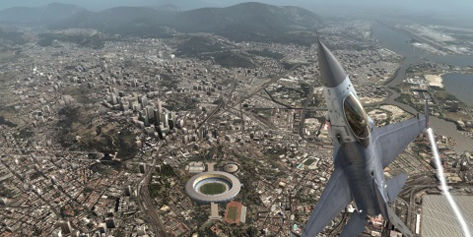