Tony Hawk is to be 'reinvented', something this "franchise needs"

09 May 2008 | By Jamie Davey
Activision has indirectly patted EA on the back for their newcomer Skate, which captured the praise of many for its unique control style and approach.

The Tony Hawk name is no stranger to videogames and seems to have lost its edge, the publishing giant plans a "breakthrough" to change all that.

"For competitive reasons we're not going to talk about it today, but we're very bullish on the kind of innovation this will bring. This won't be your father's Tony Hawk," said CEO Mike Griffith.

Little has been done to seriously shake up the skating genre though the Tony Hawk games certainly defined it and seemed untouchable. Then EA came along and delivered Skate and for a first time outing in the sport they did phenomenally well against the veteran franchise.

For those used to the TH approach it did take some getting used to, Skate relies on analogue combinations solely for all major movements. It was both a refreshing and occasionally frustrating mechanic - in the end it paid off well.

Activision plan on taking back their player base it seems - they're not happy to give EA an inch of their virtual skater base. Tony Hawk has also taken on BMX stunts too, helping to mix things up a little but they're going to need to spice up the skating if they plan on surviving.

There's two new Tony Hawk titles coming, the first is for the DS and will use "new technology not yet seen" and is due out later this year. The next major release -- the one being 'reinvented' "from the ground-up"-- will be out sometime after April next year. 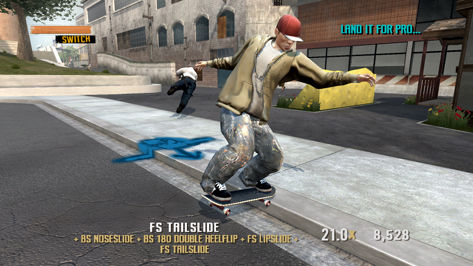