There's big prize money from the likes of Intel and Alienware too with id saying a raffle-winner, with special limited entry, could score a 2008 Chevrolet Corvette Coupe.

Id Software has listed the official competitive line-ups for 2008:

QuakeCon 2008 will mark the debut of the first-ever Intel QUAKE LIVE Championships pro tournament. QUAKE LIVE is id Software’s new game created to deliver the excitement and energy of a first-person multiplayer game to a broader audience through a free and easily accessible browser-based experience. The Intel QUAKE LIVE Championships will feature a classic $12,500 One Versus One tournament along with a $12,500 Capture the Flag Team Tournament.

Enemy Territory: QUAKE Wars™ makes its second annual tournament appearance with the Activision Enemy Territory: QUAKE Wars Team Championships. Featuring competitions on both PC and for the first time on Xbox 360, the tournament contests will enlist six-person teams to battle it out in double-elimination bracket-style competitive play, in which each squad will have the chance to attack and defend. On the Windows PC side, 16 teams will compete for $15,000 in prize money and in the Xbox 360 competition, eight teams will vie for $10,000 in prizes.

For anyone who’s dreamed of competing for prize money on the QuakeCon main stage, the Alienware Quick-Draw Challenge offers $10,000 in prize money to randomly selected attendees competing in special QUAKE LIVE competitions throughout the course of the event.

In addition to their prize money, the top 2 finalists and teams in each of the above competitive tournament events will also be given tickets to the previously announced "QuakeCon Ultimate Power Up" raffle contest, sponsored by Ventrilo, for the brand new 2008 Corvette. Additional raffle tickets and eligibility will be subject to contest rules.

Only those residents living in the US or District of Columbia can get a chance at the four wheeled prize though - those crafty disclaimer swines!

Still there's plenty to reap from QuakeCon 2008 if you've got the itch to frag some posers who need dropping a peg or seven.

"QuakeCon 2008 will be the grand slam of competitive gaming with the best games and an amazing prize list," said Todd Hollenshead, CEO, id Software.

"We’ve partnered with our sponsors this year to bring the top competitive players what they want most: skill based games, top money prizes, the most enthusiastic fans and audience and the world’s best Finals party!" 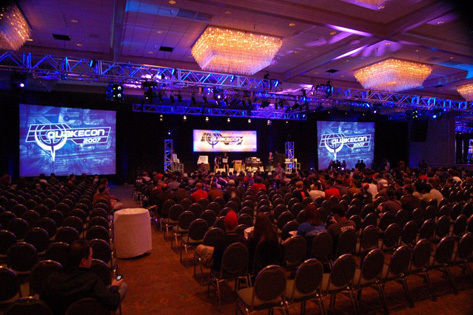