10 July 2008 | By Jamie Davey
Sega announced today the development of Stormrise, an innovative RTS game for the Xbox 360 and PlayStation 3. Stormrise marks The Creative Assembly’s first foray into developing a purpose built RTS title for console and is slated to ship in 2009.

Stormrise offers fans of the classic RTS genre an immersive and dramatic twist whilst challenging the conscience of the gamer.  Experience the heat of the battlefield by leading your troops from the front line, instead of the traditional way of controlling the units from a detached view point.   Stormrise also allows units to be commanded in the air, across rooftops, on the earth’s surface and even underground, this unique idea of “verticality” introduces multiple layers of gameplay that must be mastered for strategic advantage. The experience is heightened by a simple yet effective control system tailored specifically for consoles, which allows easy unit selection, rapid navigation and precise deployment.

“The Creative Assembly have proven their general leadership in developing RTS games through the award winning ‘Total War’ series on PC”, commented Gary Knight, European Marketing Director, SEGA Europe.  “However, Stormrise has been built from the ground up specifically for high def consoles to provide a more intense, frenetic style of game that, coupled with the all new control mechanic, will revolutionise the way RTS games are played.”

Set on a bleak and barren earth, devastated by a catastrophic event centuries ago, Stormrise sees the Echelon and the Sai battling to survive in a hostile and uninhabitable wasteland.  Remnants of a superior technological people the Echelon survived the event through self-educed hibernation, whilst the Sai, a more tribal faction, still exist having learnt to adapt to their surroundings and the new environment.  Having evolved in vastly different ways, the differences between the two factions have spurred much animosity and hatred between the two races, and the future of the planet is now hanging by a thread… 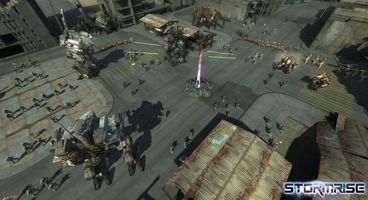 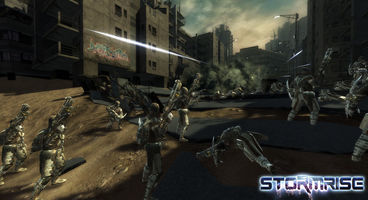 Stormrise is in development at The Creative Assembly’s Australia studio and is priming its forces for release in 2009.