11 December 2008 | By Simon Priest
Bethesda have dished on their upcoming DLC expansion this January, Operation Anchorage, and said there's plenty to do for everyone.

Also included are "new weapons, armor and achievements" and even a new 'Covert Ops' perk. The DLC will be playable "at any level, once you've exited the Vault" of course.

There are two other planned DLC releases for Fallout 3, one that takes the player to Pittsburgh and the other allows players to continue their adventures into the Capitol Wasteland after completing the main quest line.

"Once the player finds their way into the simulation, they'll be stripped of their resources and have to survive within the rules set up by the simulation's creators."

"The player will have to use a lot of their standard combat skills, along with several new tools that will only be available in the downloadable content," he continued.

No plans for any Dogmeat armour for now, dang. "We've gotten a mountain of mail requesting this, but sadly it's not planned yet!" Fingers crossed. 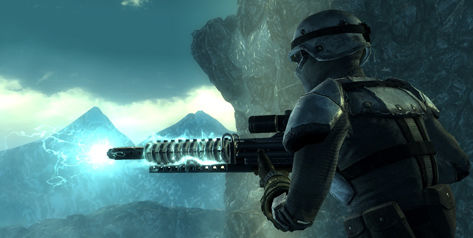