14 July 2008 | By Simon Priest
The upcoming -- and highly anticipated -- MMORPG of Warhammer Online has given the snip to four capitol cities and four of the character classes because of quality issues.

Mythic VP Mark Jacobs reasons that they "wanted to make our capital cities the best cities in any MMO," so four got canned. The MMO is also to feature anti-cheat PunkBuster.

The game was set to originally have 24 different classes across six different races with Choppa, Hammerer, Blackguard, Knight of the Blazing Sun all now being cut from retail. The same issues of quality applied to the decision of scaling back the capitol cities, which would have had one for each of the races.

"We wanted to make our capital cities the best cities in any MMO," Jacobs reasoned. "We think we're doing that, but it came at a price and that price is that the other cities aren't going in the game right now."

This is where he also revealed that Warhammer Online would be the first PC MMO to use PunkBuster, an anti-cheat system that has been used in a host of other PC titles.

"By doing this deal with PunkBuster, we wanted to show the players that we're willing to go an extra step for them," he explained. "Anything that gives a player an advantage over another player in an RvR-centric game is a very bad thing. We take this stuff incredibly seriously, our history shows that."

Click here to read the full interview between Mark Jacobs and MMORPG.com. 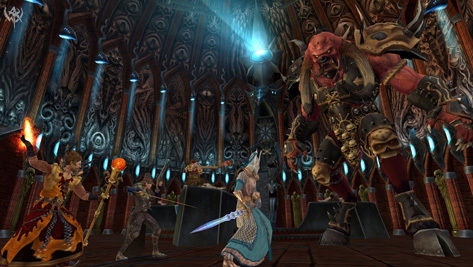