The new content is now available from Xbox Live Marketplace and comprises of one free and two premium download packs; the premium packs are available for 800 and 400 Microsoft Points respectively. 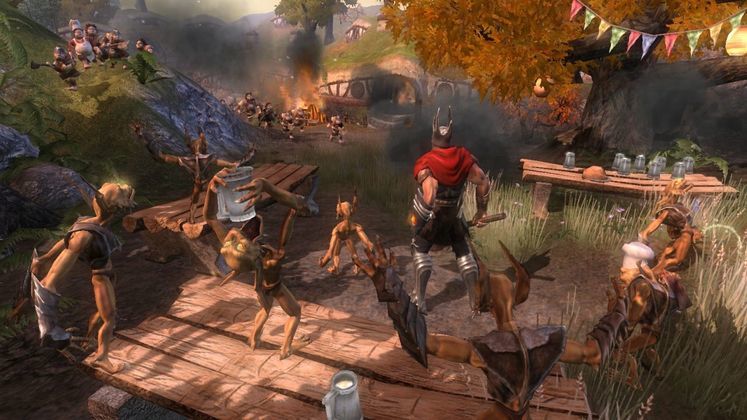 Go deeper into the Overlord's twisted world as this single-player expansion pack opens a series of hellish new levels, each a supernatural abyss for the game's five domains: Mellow Hills, Evernight, Heaven's Peak, the Golden Halls and the Ruborian Desert.

Access to each abyss is via a portal, which opens once a kingdom has been successfully conquered and the previous ruler banished to a personal hell within. However it's not just the fallen heroes that have been dragged into the abyss: the Overlord's newly loyal peasants have also been taken down into hell too.

With the undead denizens of each abyss on the attack and threatening the Overlord's reign above ground, there's only one thing for it: assemble a Minion army, descend into each abyss and embark on a fresh wave of tyranny in order to return the serfs to their homelands, defeat the fallen heroes once and for all, and claim the throne of the underworld.

Come and have a go if your Overlord's hard enough. All new pillaging fun with seven additional online multiplayer maps, including the competitive 'Capture the Maiden' map and 'Protect Your Power', where players must defend the Overlord's tower against waves of enemy attack.

Putting the Minions through their toughest workout, the Challenge pack also introduces a 'Legendary' difficulty mode, which challenges players to achieve Legendary status by using their most aggressive Minion managing skills to complete the single-player game under exceptional bad-ass circumstances.

This free content download enables players to go head to head on all of the game's original multiplayer maps in a new split screen mode. The update also introduces a new multiplayer map, Rocky Race, which sees a pair of Overlords working cooperatively to survive the onslaught of an arch rock giant on the rampage.

All content packs are now available from Xbox LIVE Marketplace for the Xbox 360 and require players to have a full copy of Overlord in order to experience the additional content.