20 March 2008 | By Kres
Silverlode Interactive announced today that it has been focusing on getting things in place to resolve the remaining crashes that some users are experiencing whilst playing Saga, the newly released MMORTS. 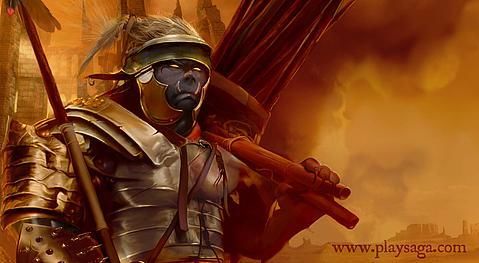 The official website read; “We're hoping to see them all disappear over the next few weeks as we finish gathering data and put all the pieces into place. We're also working fast and furious on fixes such as market issues. We believe we've taken care of all known market issues and any issues related to sending things via attachments. Please let us know if this is not the case. Next patch we expect to push up a significant balance update as well as have a host of other bugs and fixes.”

Here's a list of the changes this new patch will make:

Added a fix which should help with chest pickups in unaccessible areas.

Fixed a bug which could tell you that you were disconnected from the battle after it was over.

Fixed the costs of all walls and wall upgrades to match with tooltips.

Fixed the costs of all university building upgrades to match tooltips.

Fixed all dependencies in the university.

Fixed a bug with the chatbox tabs.

Fixed a bug which would allow spells such as speed debuffs to create a permanent speed buff instead.

Territory raids no longer allow you to boot or ban or in any way prevent the owner of the territory from being a part.

Raiding now gives you points in guild wars based off the costs of the raid as long as you survive the full duration.

Fixed a bug which could overwrite resources given in domain when a tick occurred.

Fixed a crash when replying to a message with a maxed out subject.

Fixed a bug that closed the market when you try to buyout a trade you can't afford at all.

The Buyout button in the market will now go disabled when you can't afford a buyout.

Territory raids no longer will show up as hardcore in the battlefinder.

Frustrum will now draw correctly on the mini-map.

Units will no longer walk on water.

You will now be forced to build a University of the level researched.

Free accounts can no longer be espionaged.

You can now send mail messages inserting a subject or body.

All PvPs no longer have a starting region. It is now the whole map.

Fixed a bug that allowed any nation to play quests even if they didn't meet the requirements.

Fixed a bug in the my offers tab that wouldn't select the correct offer unless you click where there isn't a button on the row. It should now work as expected.

Fixed a crash with market connection errors in the Sell tab.

University upgrades should update themselves as they're purchased.

Only the host of territory quests will pay costs and receive credit for completing them. To gain your territory you will have to host the quests.

Several quests tweaked and or fixed.

Next week we'll have some significant adjustments. This week there are only a few minor tweaks - a few of the more important ones are listed below.