23 May 2008 | By Jamie Davey
Yes a whole movies worth in singular scripted cut scenes, Metal Gear Solid is well known for its lengthy story telling but this is something else entirely.

The article practically gasps -- in print -- that it's the "equivalent of all three Godfather movies on one disc." Issue 108 of PSW is in shops now.

Hideo Kojima, creator of Metal Gear Solid, is to deliver the lengthiest instalment of a linear action game ever. If you're new to the series then it tends to take a few plays through to understand the web of conspiracies, time is most certainly not on the gamer’s side anymore.

"As you'd expect, you'll spend a lot of time watching cut-scenes, so if you found previous games' story exposition laborious, then you'd better find yourself a nice cushion and plenty of teabags in readiness for MGS4's," read PSW's article.

"They can be skipped, but you'll be missing out on some of the finally crafted examples of FMV footage anywhere in gaming."

No wonder the game had to be compressed and even have chunks cut to fit the Blu-ray disc, which if dual-layered it can hold 50 GB. Luckily you can at least pause the cut scenes if you need a trip to the lil boys room or need to stock up on your sugar levels.

Metal Gear Solid 4: Guns of the Patriots is due exclusively on PS3 this June 12th. 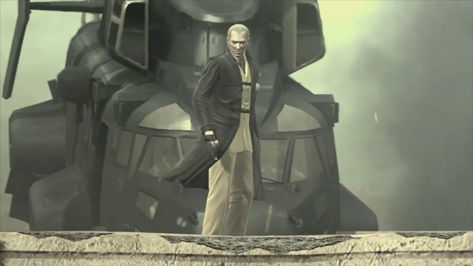