Pirates and strategy on XBLA, Yo-Ho Kablammo and Defense Grid

01 September 2009 | By Simon Priest
Microsoft has confirmed that Canalside's Yo-Ho Kablammo and Hidden Path's Defense Grid will be debuting on Xbox Live Arcade this week, tomorrow in fact.

Both titles will be going for 800 Microsoft Points. Yo-Ho Kablammo has players blasting each other on the high seas with power-ups, while Defense Grid is holding the line with towers.

"Master your vessel and take to the seas in this frantic action-packed game. Blast your foes with cannon fire, collect numerous power-ups to give you the upper hand, and collect the spoils of your victory," blurbs Xbox.com for Yo-Ho Kablammo from Canalside Studios.

It's available with multiplayer versus or you can try out 15 singleplayer challenges, and you can customise your own game types.

"Strategically place your towers on the map to prevent alien enemies from stealing your power cores. Play for just fifteen minutes or several hours!" reads Xbox.com on Defense Grid: The Awakening from Hidden Path Entertainment.

The XBLA release of the tower strategy title contains all the levels from the PC version plus some new bonus ones. You must hold off ever increasing numbers of deadly enemies.

Both new XBLA titles will be available on September 2nd for 800 Microsoft Points each. 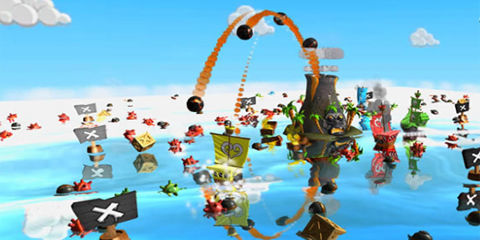