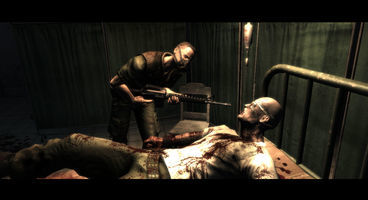 At the height of the Vietnam War, a covert ops cargo plane carrying a top-secret consignment known only as 'Whiteknight' is lost over the deepest, uncharted jungles. Special Ops soldiers are immediately dispatched to the scene to retrieve the top secret shipment and one-by-one they disappear without a trace... until one month later, one of them suddenly walks out of the jungle.

Crazed and deranged, something in the jungle had ripped out his humanity, poisoning his soul. Something in the darkness had driven him mad… and followed him out.

“Shellshock 2: Blood Trails takes players to a Vietnam War unlike any they will have experienced before. This is a war where your enemy doesn’t just want you dead… it wants to rip you to pieces,” said Lee Singleton, General Manager of Eidos Games Studios. “As the infected turn one-by-one, your instinct to fight becomes an instinct for flight, to leave the real horror of this war far behind.”

Shellshock 2: Blood Trails will be released for the Xbox 360, PlayStation 3 and PC.