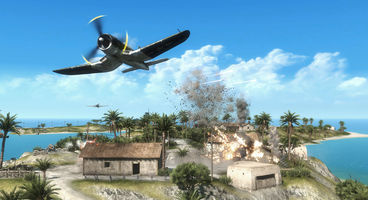 Electronic Arts announced today that Battlefield 1943 will be available on the Xbox Live Marketplace on July 8th and the PlayStation Network on July 9th for 1200 MS points and £9.99 respectively.

Battlefield 1943 is a First-Person Shooter multiplayer game that puts players in the middle of a dogfight on land, sea or in the skies. The game introduces two thrilling new modes that can be played across four classic Battlefield tropical WWII maps: Wake Island, Guadalcanal, Iwo Jima and Coral Sea. These maps are inspired by the award winning Battlefield 1942 game, but have been redesigned and reengineered using the DICE destructible Frostbite engine which takes down walls, blockades and cover spots, leaving players with almost nowhere to hide. The game delivers endless hours of social online gameplay for extraordinary value.

The Coral Sea map will be unlocked as part of a worldwide community challenge, where players will work together to reach 43million kills on both Xbox LIVE and the PlayStation Network. To help gamers reach that goal, up to 24 players can play together online in countless matches. They will have the freedom to compete by land, air and sea as either the US Marines or the Imperial Japanese Navy. Whether they choose to play the role of a rifleman crawling through the trenches, a steel-fisted tank commander, or a dog fighting ace pilot, gamers will have the power to rule the battlefield.

“Battlefield 1943 is going to change consumer expectations of what a downloadable game can be. By offering Frostbite’s next generation destruction technology with a full Vehicle Warfare FPS multiplayer experience at a mere 560MB, Battlefield 1943 sets a new standard,” said Gordon Van Dyke, Producer on Battlefield 1943. “Our goal is to blow people away with a fully accessible, retail-calibre game for veteran Battlefield fans and shooter fans alike to enjoy for only £9.99.”