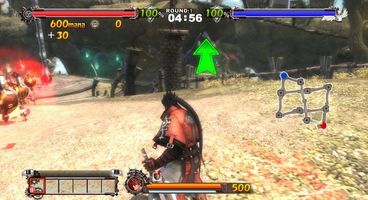 505 Games announced today that Guilty Gear 2: Overture will be released exclusively for the Xbox 360 on 4th September 2009. Guilty Gear 2 will take fans in a bold new direction, borrowing elements from genres outside of the traditional one-on-one fighting action for which Guilty Gear has become famed.

Guilty Gear 2: Overture developer Arc System Works has blended action and real time strategy for their latest instalment, and for the first time have introduced 3D graphics the series. As well as taking control of their chosen character, players will command legions of loyal followers to crush all in their path. Battles are won and lost by destruction of opponents’ strongholds, known as ‘Masterghosts’ and by successfully defending one’s own from enemy attack. Effective and tactical use of support troops, or ‘servants’, to achieve these aims as well as sharp fighting technique are the keys to victory.

Offering a full single player campaign, four way multiplayer over Xbox LIVE or two player local multiplayer, Guilty Gear 2: Overture will also feature 50 unique units designed by famed series artist Daisuke Ishiwatari. Many familiar characters return to the game, including Sol Badguy, Ky Kiske and the mysterious That Man, all of whom have their signature special attacks recreated for the first time in glorious 3D.