He's still the boss at Lionhead, but now he's charged with casting his eye across a number of studios to help those creative lights be "as bright as possible." They won't all be his games.

"The best way for us to make sure our platforms evolve in a way that enables the best creative experiences is to make sure our creative leaders are closely tied into the work that's going on with the platform team," explained Phil Spencer, Microsoft Game Studio's general manager, speaking with GamesIndustry.biz.

"What we're asking Peter to do is a creative director role for us in Europe, overseeing all of the creative work that goes on at our studios in the UK and Europe, and the different projects that we have with external partners."

"His role there is to not only help the collaborations and to bring both the thinking from that region back to the platform and Microsoft Game Studios as different things are incubating and being worked on, but the reverse is also true, of taking global knowledge of our platform efforts and different efforts at MGS and help provide context and guidance to those teams."

Molyneux doesn't aim to leave his own stamp on each and every game he comes into contact with though, he just wants to help out where ever he can and make sure teams are energized.

"What you're not going to see is ten Peter Molyneux games. The value of this role is for someone like myself going in and making those little tiny lights of an idea shine as brightly as possible and ensuring everybody within the organisation clearly understands why we're making those titles, the purpose of those titles and their importance to Microsoft overall," said Molyneux.

"All I'm going to be doing is making sure those lights are as bright as possible. People at Rare and other European studios are super, super bright and creative people and I'll learn as much about design from them as they would from me."

He'll be helping Microsoft spearhead innovation and convincing developers to explore beyond the usual tried and true method of videogames.

"I'm definitely not going to go in and say 'this is a dumb idea' and 'this is a good idea'. I'm more about making sure they really are doing the experiences they're passionate about. Because passion is really central."

"That's probably going to involve innovation, I'm going to be pushing them more on the innovation side, especially with project Natal, and saying, 'look, don't think you've got all of your design comforts here any more, let's think of a new way of doing all that.'"

Molyneux promises his role at Lionhead Studios and his involvement in their two title projects aren't going to suffer, he's still very much involved in their development. Congratulations Peter. 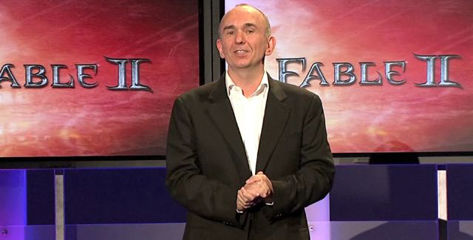 He's not abandoning his cubs.