05 June 2009 | By Simon Priest
John Koller of Sony Corp has admitted they find Project Natal "impressive" because of its full-body scan, but it has issues around the Z axis.

"Microsoft's is impressive because it does a full-body scan," Koller tells Gamasutra. However Natal has "depth issues on the Z axis" which PlayStation Eye avoids. "The PlayStation Eye is more accurate and more precise."

Microsoft and Stephen Spielberg have described the controller as the last barrier between games and gamers fully bonding, from experiencing truer immersion. Sony counters that there are just some genres that will only ever work with an object in hand, and a button to push. "It's not necessary for every genre," says Koller. "But without it, you can't play every genre."

Microsoft are "going to have issues with shooting games, for example," he suggests. "We want to be as diverse as we can; the controller that we're looking at will be open as possible."

Both are in the early stages of development but they recognise whoever gets to market first will be an important factor. "It's not going to be this calendar year," says Koller on their motion-controller. Project Natal meanwhile is expected no earlier than late next year.

Are controllers the enemy when it comes to 'true' immersion, or are development studios just not capturing the moment right? Only a bad workman blames his tools... or so they say. 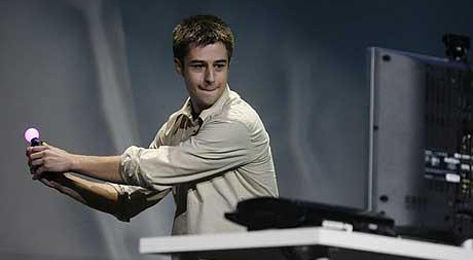