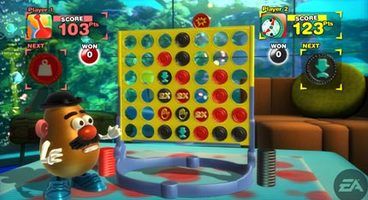 EA today announced that it will be bringing out Xbox Live Arcade versions of perennial board game favourites under the Hasbro Family Game Night banner, which will feature games such as Boggle, Battleship, Yahtzee, Connect Four, Sorry! and Sorry! Sliders.

"We believe our Hasbro Family Game Night channel on Xbox LIVE Arcade will be one of the most dynamic and fun collections available on the platform," said Chip Lange, General Manager of EA Hasbro. "We've been given the unique opportunity to create an exclusive EA Hasbro branded destination within the Xbox LIVE Arcade so players can easily find and play our lineup family-friendly digital board games. Just as families have game closets in their home, they will also be able to stock a digital game closet serving up hours of interactive play for kids and adults alike."

All games will feature both original and new ways to play, including a Party Mode that features multiple mini-game versions of each title. Additional customisation features will allow players to earn virtual trophies, furniture and themes to decorate their personal virtual game rooms. The Hasbro Family Game Night lineup will take full advantage of Xbox LIVE community features such as online play, Achievements, the ability to launch new games without leaving the environment, and sharing customized space with friends. The EA Hasbro virtual game closet is slated to open in Spring 2009 with multiple games followed by additional releases throughout the year.