07 May 2009 | By Simon Priest
THQ has now bared all for the "challenging fiscal" year gone, they report a net loss of $431.1m with dipped sales from the previous year.

Despite this, CEO Brian Farrell remains positive that THQ will return fighting fit next year when they once again start making a profit. To that end they've secured credit as "a prudent backup".

The publisher announced they "signed a commitment letter for a $35 million senior secured credit facility with Bank of America," with CFO Paul Pucino going on to explain they're "pursuing this credit facility as a prudent backup to our $141 million cash and short-term investment balance at March 31, 2009."

THQ is happy to toot their own horn for Saints Row 2 surpassing 2.8 million units sold, and for Relic's Warhammer 40K: Dawn of War II performing like the stallion it is "as the best selling PC game across major video game markets worldwide."

Fiscal year 2008 reported a net loss of $35.3m with sales reaching $1.03bn, unfortunately total sales for the fiscal just past slipped to $830m. THQ has taken a number of cost-cutting measures which Farrell expects to start really paying off in 2010.

Has Dawn of War II's new direction debuted well for you? It did for us. 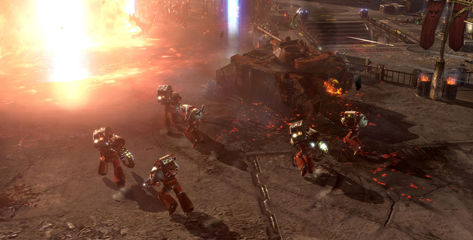