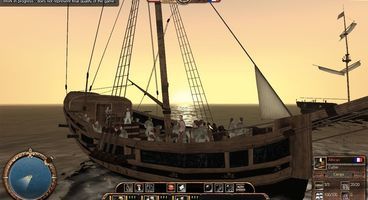 Paradox Interactive and Nitro Games today announced a "Designer's Cut" update for East India Company. Based on ideas from the game's developers, as well as feedback from the community, the development team will be releasing a free add-on.

The free add-on introduces a vast amount of enhancements for improved gameplay, including new port views, tactical battles can now be fought on an island environment providing completely new tactical elements, the introduction of multiplayer modes "Beehive" and "Breakthrough", history graphs to help track long term progress, and many more new features to make East India Company a deeper experience than ever before.

"In 'Designer’s Cut', we made several improvements to the original game to make it even better," said Kim Soares, lead designer for East India Company. "Some features were chosen from the ideas presented to us by the East India Company community. This kind of feedback from the active players is invaluable, as they have spent hundreds of hours playing our game and know it inside and out."

The East India Company Designer's Cut will be available for download on October 27.