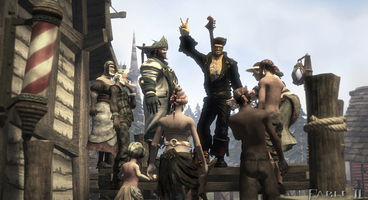 Lionhead has released the latest patch for Fable II, which fixes numerous bugs that were reported by various community members on the official forums for Fable II. The update can be download from Xbox Live now.

* The Ritual/Monk’s Quest – Fixed the issue with the Abbott becoming unresponsive if you leave Oakfield before he finishes talking. This will fix the problem if you’ve already hit it, too.

* Guild Cave chest – resolves any issues with previously inability to retrieve items unlocked from Limited Collector’s Edition, website or Chicken Kickin’ game. If you’ve already hit this bug you should now get your items.

* The Spire (Pt2) – no more issues with ship captain being unresponsive

* T.O.B.Y./Trouble In Bloodstone – you’ll no longer get stuck during T.O.B.Y. quests (Bloodstone)

* Your child will no longer be chosen as an assassination target

Start up Fable II and you should get a prompt asking you to download the latest patch.

Don't forget, the downloadable content Knothole Island will be released on Tuesday for 800 MS points.