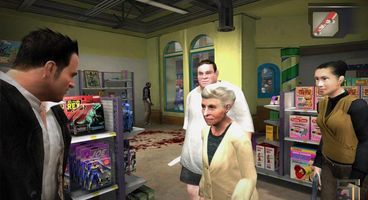 Capcom US has announced a Platinum Hits Triple Pack for the Xbox 360. This collection of three enjoyable games will be available in the US from 8th September, 2009 for an estimated price of $39.99.

It doesn't look like this will be coming to Europe.

Capcom®, a leading worldwide developer and publisher of video games, today announced the Platinum Hits Triple Pack for the Xbox 360® video game and entertainment system from Microsoft. This affordable collection of three of Capcom’s greatest games for the Xbox 360 will be available for a suggested retail price of $39.99 beginning September 8, 2009.

The Platinum Hits Triple Pack combines Dead Rising®, Lost Planet®: Extreme Condition - Colonies Edition, & Devil May Cry® 4 all in one box. Each of these games has been awarded Platinum Hits “Best Seller” status and together have sold over 3 million units in North America alone. Any gamer who had the bad luck of missing these legendary titles, will now have a chance to redeem themselves for a great low price.

Dead Rising is an action horror game that follows the harrowing tale of Frank West, an overly zealous freelance photojournalist in pursuit of the story of a lifetime. What he finds is a small suburban town completely overrun by zombies. He seeks refuge in the local shopping mall, but soon learns it is far from the safe haven he had thought. Dead Rising takes place over 72 hours, during which Frank must unravel the mystery behind the catastrophe and survive the dangerous swarm of enemies that lie in wait. The unprecedented level of freedom provides players with a vast array of gameplay possibilities to do anything and everything they've wanted to do in a mall. Hundreds of unique objects can be used as weapons to fend off the hordes of zombies - everything from golf clubs and baseball bats to cash registers and stuffed animals.

Lost Planet: Extreme Condition is a sci-fi third-person action shooter that offers an amazing single player experience offline and a heart-pounding multiplayer experience online. The adventure takes place on the frozen alien planet E.D.N. III. To survive, gamers will battle snow pirates, gigantic indigenous creatures known as Akrid and harvest the precious thermal energy found inside them. To do this they’ll utilize hi-tech weaponry and Vital Suits (VS ) – gigantic mechs used to traverse the treacherous frozen planet they’re on. In Lost Planet: Extreme Condition - Colonies Edition, players get the same compelling single player experience found in the original game, with the addition of three new modes. In Score Attack, all enemies have points assigned to them and the score awarded will change depending on how they are defeated, with skilled marksmen being rewarded. For those who thrive on a challenge, Trial Battle Mode delivers, pitting players against all of the game’s bosses, one after another. Players of both Score Attack and Trial Battle modes will be able to compare their skills and compete for bragging rights via the online ranking system. Finally things get a little crazy with Off Limit Mode which lets players take on Lost Planet’s harsh environments and enemies with over-the-top, super-charged weapons and a powered-up grappling hook. Lost Planet: Extreme Condition - Colonies Edition was one of the first games to allow cross-platform connectivity from Xbox LIVE® to Games for Windows – LIVE, allowing console and Windows-based PC users to battle it out on the same online battlefield.

Devil May Cry 4 immerses gamers in a gothic supernatural world, where a new protagonist, Nero, clashes with Dante, the featured character of the previous Devil May Cry® games. As Nero, players will unleash incredible attacks and non-stop combos using a unique new gameplay mechanic, his powerful “Devil Bringer” arm. Fans of Dante won’t be disappointed as he too will be playable during the course of the game. With the advanced graphics of the current game systems, high definition visuals and intricate detail come to life as players explore new and exotic locales. Dynamic action and undeniable style combine with unprecedented fighting options and a gripping story to produce the incomparable experience that only a Devil May Cry game can deliver.