13 August 2009 | By Simon Priest
According to a snap shot of a Meijer catalogue, August 30th will see Microsoft's Xbox 360 Elite model drop down in price to $299.99 which effectively nudges out the Pro.

Whispers and rumbles of a price drop have been going for a while now, ever since Ars Technica's super secret mole spilled the beans. Microsoft "does not comment" on such things.

"Looks like we have an execution date for the Xbox 360 Pro model, with this shot from a Meijer catalogue due on August 30 indicating the 360 Elite is in line for a Pro-sized price cut," reports Kotaku.

The Xbox 360 Pro model is also said to be on its way out, having become quite a redundant option for next-gen gamers. The 360 Elite packs a greater hard drive, and looks way cooler anyway. "Microsoft does not comment on rumors or speculation," said the corporate giant; they're no fun. 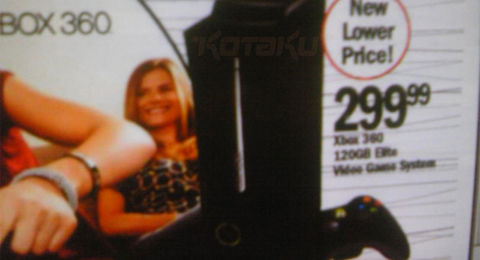