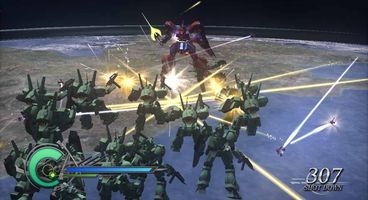 KOEI today announced that the European release of Dynasty Warriors: Gundam 2 for the Xbox 360 and PlayStation 3 will be on March 27th, 2009.

With the Gundam phenomenon once again taking the gaming and anime worlds by storm in Japan this is the chance for European gamers to discover what all the fuss is about. A chance to take control of robots the size of tower blocks. A chance to unleash enough firepower to level entire cities. A chance to wade into battle against hundreds of armed to the teeth Mobile Suits. A chance to indulge in some of the most elaborate combos and incredible attack animations yet to feature in a Warriors game. And a chance to light up their TV screens with a spectacular feast of pyrotechnic mayhem as armies of giant robots clash in massed battles on a stupendous scale.